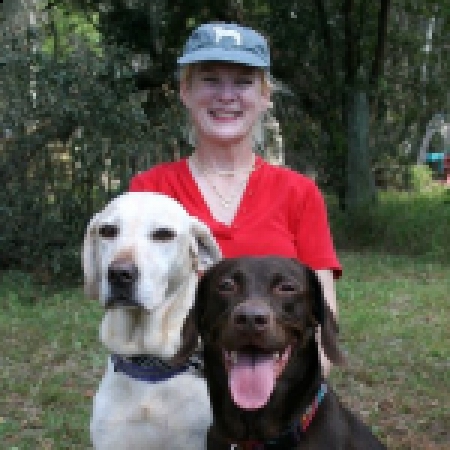 Karen's first official obedience class as a student was in January 1985. Her black Lab, "Winchester" won fourth place in the graduation match. She decided to go on to advanced work to be able to earn AKC titles on her dog.

February 23, 1987 the Dog Training Club of Tampa welcomed her as a member. She became an assistant puppy instructor shortly thereafter. Today's trainers recommend puppies begin training at eight weeks of age. The myths that dogs should be six months or one year old before training are indeed myths.

September and October 1987 brought the first two CD titles, 1 for "Venus" (black female) and 1 for "Bear". By April 1989 Karen earned her first CDX obedience title with the help of "Bear", a chocolate Labrador retriever. In 1989, she earned her first instructors award from the Dog Training Club of Tampa.

By 1990, Karen was teaching classes for a private school, Hillsborough County Parks & Recreation, and her own club. In 1991 "Bear" helped her earn the Utility Dog Obedience Title (UD). She and her dogs represent the Dog Training Club of Tampa at the Florida State Fair's purebred dog tent annually. After the club voted to stop doing demonstrations at the Fair, she teamed up with Peggy Manker to make sure the crowd had exciting dogs to see. Many club members still help but they do it own their own and not as representatives of the club. They've done demonstrations for schools, pet charity events and special events at the Tampa Public Library.

After coordinating scent hurdle races at the Florida State Fair, she got permission to change the races to flyball races. More people and dogs can participate in flyball since the dogs don't need advanced scent training.

While continuing to train and title dogs Karen strives to read the latest magazines and literature and attend every possible seminar to improve her skills as an instructor.

In 1993, Karen applied to and was accepted as an endorsed member of the National Association of Dog Obedience Instructors. Please click on NADOI <http://www.nadoi.org/about.htm>to learn more about this special organization.

Karen & other DTCT members trained agility obstacles before agility was a sanctioned event in the United States. They could demonstrate agility but not earn titles.

Karen demonstrated musical freestyle at the Gaines National Obedience Competition in Orlando, in 1995 before freestyle was a sanctioned event.

In 2000, "Odie" a yellow Labrador, joyously earned his first official AKC agility title at the age of 10 years. In one of those competitions he was first place in his class, completing a perfect score faster than all the other dogs in every height & age range."Conan", another chocolate, trained for both obedience (he earned his AKC CD on June 26, 1999) and agility titles.

On December 30th, 2001, Odie was thrilled to get his second AKC agility title with two first places and one second place score.

By January of 2004, Conan earned his NAP and NJP AKC agility titles with 5 first place and 2 second place scores at 9 years of age!

In the Autumn of 2002, our friend Anita "found" a dog that needed a home. Her husband, David, had adopted "Boo" from Karen after Boo found himself slightly homeless but living with Karen. The Labrador retriever that Anita found was a small yellow female called "Biloxi". Biloxi was paper trained, much to our surprise, so although "wee wee pads" were necessary for a while, she was and is very politely behaved. Her house manners were so wonderful she could start the fun of training right away, while Conan was busy with his trials.

January 2nd 2005, Biloxi got her first qualifying AKC Agility score (a second place in Novice JWW). She earned her Novice Standard (NA) title (Jan.8th she won third place; Jan. 9th she won 4th place and Mar. 12th won first place). Biloxi finished her Novice Jumpers (NAJ) title winning first place March 20 (preceded by a second place on Jan. 2nd and another second place Jan. 22nd). She began collecting Open scores the very same day, taking first place in Open Standard. Biloxi was called upon by Team Lightning Captain Bonnie McDonald (an AKC Agility Judge and much more) to represent the Dog Training Club of Tampa again at DACOF July 2005. This time she was in the Open class on the team. Biloxi came in second place in her class, competing against the very best dogs of the schools and clubs participating. Second place in the State of Florida was almost too good to be true! The next day's competition was even better because her team, "Lightning" won FIRST place in the State of Florida!

During Biloxi's awesome year, a new little lady joined the "all rescue" dog household, a chocolate cutie that has accomplished ... the ability to be quiet! It took close to a year to reduce "Hyena's" loud, high pitched barking (sometimes more like screaming) to some gentle whining. She very well may show Biloxi what "fast" really means.

By the summer of 2006, Biloxi had finished her Rally Advanced title and has now earned her AX & AXJ (Excellent Level Agility titles). She is also working on her obedience training and hopes to be earning scores toward her CD soon. She finished her Rally Excellent title in the fall of 2006.

Hyena earned her Novice Agility Jumper (NAJ) Title on September 23, 2007 with a third place. The other two required qualifying runs were March 10, 2007 (second place) and March 24, 2007 (fourth place). Hyena earned her Novice Standard Agility (NA) Title March 11, 2007 with a second place. Hyena has earned her OA, OAJ, AX & AXJ as of the Spring of 2011. She has great potential and we are headed for higher titles than ever.

I would like to take a moment to THANK Daniel McDonald of Bonjon Training Ranch for his excellent coaching, teaching, and showing me what I should have seen myself. His ability to see the sensitivity Biloxi has, and to make me see it too, has taken us beyond what I thought was possible. I trust he will teach me how to handle a very different and fast dog (Hyena) to the best of my abilities. THANK YOU, DANIEL! I thank Bonnie McDonald for giving Kizzie & I such a good start.

Spring of 2011 update: Hyena now has her AX and AXJ and is only 1 score short of her MXJ. She is not having problems with speed and is gaining MACH points. We have a new little girl (Kizzie) we love to work with. She is a Cairn Terrier owned by Charlotte Anderson that has brought in several ribbons and made us all very proud. There are only a handful of Cairns that run in agility.

May 2011 Karen became the trainer for the South Tampa Puppy Palace. This is a wonderful facility (even if we don't consider the special training center) for daycare, grooming and boarding.The dogs just love it!Come by and take a tour. 4313 Pearl Ave in Tampa. The training center is indoors with professional matting and high ceilings. It's perfect for training year round.

Above all, Karen believes training should be fun and kind for the owner and the dog. Force training (as we were taught 27 years ago using choke chains) is not necessary ....smiles & wagging tails are!