Getting a New Lease on Life when

The use of animal prosthetics is on the rise

Animals that have met with misfortune, whether from a birth defect, accident, disease or even human cruelty, are now getting a second chance at life due to human intervention and technological advances. Left disabled without limbs, fins, flippers, beaks or tails, these creatures face a grim future, if one at all. But innovative prosthetics can change those survival odds if someone comes to their rescue.

Nature profiles these animals, their rescuers and the individuals whose work has transformed their lives when My Bionic Pet airs Wednesday, April 9 at 8 p.m. (ET) on PBS (check local listings). After the broadcast, the episode will be available for online streaming at pbs.org/nature.

My Bionic Pet shows that while animal prosthetics are sometimes later retrofitted for human needs, engineers most often adapt human technologies to an animal's anatomy. Westcoast Brace & Limb in Tampa, Florida, made its first brace for a dog named Journey, a golden retriever born without his front left paw. Jennifer Robinson, until recently the patient program director at Westcoast, and born with a limb deficiency of both legs, has a close bond with him. She often worked with Journey, a certified therapy dog, helping amputees adjust to life with prosthetics. The dog has also become a favorite visitor to patients at St. Joseph's Children Hospital, as well as veterans and the elderly.

The fabrication and subsequent operation to attach artificial limbs can be expensive, but as My Bionic Pet explains, a number of people have volunteered to assume the costs - sometimes with fundraising support - and even care of these disabled animals. Los Angeles area friends Kathy Wyer and Elodie Lorenz decided to co-foster Roofus, a blind golden retriever with deformed front legs, and arrange for specialized prosthetics that allow him to walk with all four legs. Likewise, Tara Bayne and Devin Napier from Dartmouth, Nova Scotia, became owners of Driftwood, a border collie puppy born with both rear feet missing. Nature follows Driftwood's surgery and subsequent first steps on his new artificial hind feet.

The documentary notes that it's often a matter of trial and error before a solution is reached. It was a team effort by Phoenix's Core Institute and Midwestern University professor Justin Georgi to design a replacement rubber tail for Mr. Stubbs, an alligator whose appendage was bitten off by a larger gator. Other stories include replacing part of a swan's deformed beak so he can preen and eat properly at the Carolina Waterfowl Rescue in Indian Trail, North Carolina; and providing Molly, an injured pony, with a new prosthetic leg so she can serve as a therapy animal around the New Orleans area.

Not every disability requires a high-tech solution. When a piglet, born with deformed, unusable back legs, was brought to veterinarian Dr. Len Lucero's clinic to be euthanized, the Florida vet offered to take care of him. Dr. Lucero built a wheeled harness from some of his son's old toys so newly named pet Chris P. Bacon could move around. The porcine pet has since graduated to a wheelchair originally built for dogs, having outgrown his first homemade device.

Nature pioneered a television genre that is now widely emulated in the broadcast industry.  Throughout its history, Nature has brought the natural world to millions of viewers.  The series has been consistently among the most-watched primetime series on public television.

Nature has won over 700 honors from the television industry, the international wildlife film communities and environmental organizations, including 11 Emmys and three Peabodys.  The series received two of wildlife film industry's highest honors: the Christopher Parsons Outstanding Achievement Award given by the Wildscreen Festival and the Grand Teton Award given by the Jackson Hole Wildlife Film Festival. Recently, the International Wildlife Film Festival honored Nature executive producer Fred Kaufman with its Lifetime Achievement Award for Media.

Support for this Nature program was made possible in part by the Arnhold Family in memory of Clarisse Arnhold, the Lillian Goldman Charitable Trust, the Filomen M. D'Agostino Foundation, by the Corporation for Public Broadcasting and by the nation's public television stations.

As New York's flagship public media provider and the parent company of THIRTEEN and WLIW21 and operator of NJTV, WNET brings quality arts, education and public affairs programming to over 5 million viewers each week. WNET produces and presents such acclaimed PBS series as Nature, Great Performances, American Masters, PBS NewsHour Weekend, Charlie Rose and a range of documentaries, children's programs, and local news and cultural offerings available on air and online. Pioneers in educational programming, WNET has created such groundbreaking series as Get the Math, Oh Noah! and Cyberchase and provides tools for educators that bring compelling content to life in the classroom and at home. WNET highlights the tri-state's unique culture and diverse communities through NYC-ARTS, Reel 13, NJTV News with Mike Schneider and MetroFocus, the multi-platform news magazine focusing on the New York region. WNET is also a leader in connecting with viewers on emerging platforms, including the THIRTEEN Explore iPad App where users can stream PBS content for free.

My Bionic Pet is part of PBS' new "Think Wednesday" programming lineup of television's best science, nature and technology programming that includes the acclaimed series NATURE and NOVA, the highest-rated nature and science series on television, coupled with new special programming at 10 p.m.  Wednesday nights on PBS offer new perspectives on life in the universe and keep viewers both curious and wanting more. 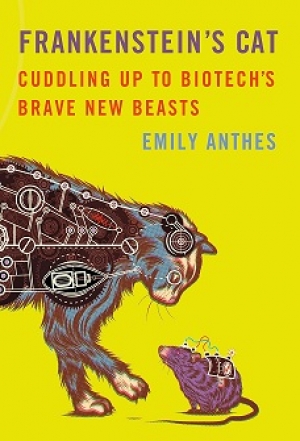 “An elegant tour of the wild and fraught sideshow of animal biotechnology . . . Anthes lays out the facts, but it is still up to readers to decide which side of the ethical divide they will fall on. Learned, entertaining and illuminating.” —Kirkus Reviews

Cuddling Up to Biotech’s

All over the world, strange new creatures are hatching. Consider Mr. Green Genes, an odd cat born in a New Orleans lab. This feline has ordinary downy orange fur, but under ultraviolet light, his soft pink nose turns neon green. The insides of his ears and the whites—or greens—of his eyes also glow brightly, his face emerging from the dark like a modern-day Cheshire Cat. Elsewhere, cyborg rats with microchips fastened to their protruding brains are being guided—like remote-controlled toys—around laboratory obstacle courses. Scientists are creating chickens that lay eggs containing lifesaving drugs, pigeons that transmit data about air pollution, and beetles wired up to perform wartime surveillance.

Science has created a whole new toolbox for shaping the world’s wild things, and scientists can now tinker with genes, turning a small stretch of DNA on or off or transferring bits of biological code between species. They can use tiny electronic devices to turn animals into cyborgs, supplementing their natural senses and capabilities. There hasn’t been this much innovation surrounding other species since they were first domesticated millennia ago. Today scientists, as well as entrepreneurs, are reimagining and reinventing animals.

Biotechnology can be used for the good of animals, but, as in the case of prosthetics, the technology can also jump across species barriers. By enhancing animals, we are already discovering ways to make ourselves smarter and stronger, faster and fitter, healthier and happier. Between the rise in diabetes, which can lead to amputations, and ongoing wars, the number of human amputees is predicted to grow by 40 percent by 2020. The breakthroughs prosthetists are making with injured animals could improve prosthetic devices for humans. A material developed for use with a tailless dolphin is already being used in the prostheses of amputee athletes, and a procedure first used to give cats and dogs bionic limbs is currently being tested in humans.

The world described in the Frankenstein’s Cat—a world including everything from cloned pets to cyborg insects—is not part of some distant sci fi future. It’s already happening. There are cutting-edge animals living in fields, homes, and nature preserves across America. Moral and ethical debates about animal alterations can make or break a new product or technology. Anthes argues that if we reject these technologies wholesale, we’ll lose the good as well as the bad.

Emily Anthes is a journalist whose work has appeared in Wired, Psychology Today, Slate, Scientific American, The Boston Globe, and other publications. She holds a master’s degree in science writing from MIT and a bachelor’s degree in the history of science and medicine from Yale. She lives in Brooklyn with her dog, Milo.

Emily Anthes will be touring to the following cities:

Steve Luhrs Founder of Bionic will join Jon on Talkin' Pets this Saturday at 6:30 PM EST to discuss his line of products - Tune in for give aways as well...

Now For Small To Large Dogs

designs to include more sizes, rounding out the line for small to large dogs.

Made from Bionic Rubber®, these dog toys are unique in that they withstand the most

aggressive chewers. Now there are new toy sizes suitable for most size dogs.

Using a proprietary material that is non-toxic, FDA food grade material, these toys are

designed for extreme durability and are a delight for dogs to chew on. The Bionic Rubber

* The four Bionic toys are:

Interactive 2-in-1 play toy. Designed as a chase and retrieve toy, plus reversible Tug Toy.

Not a chew toy. Also creates a fun flight path that dogs love to chase after. Durable design is

Shaped to fit the curvature of a dog’s mouth, the Bionic Bone has an open center so it

can be stuffed with treats. Provides a chewy feel. Keeps dogs occupied for hours at a time.

that fascinates and challenges dogs for the chase. Surface is designed with ridges providing a

to control the difficulty to get the treat out. Works well with most smaller kibble stuffer treats. No

boredom with this toy, it will keep dogs entertained and challenged for hours. Easy to see, bright

General Manager for Bionic Pet Products. “The reception we received at the 2011 Pet Expo in

Orlando, Florida was overwhelming. Bionic is ramping up production to satisfy faster deliveries

Bionic Rubber® is non-toxic, FDA food-grade material. It does not contain any harmful phthalates,

recyclable, allowing us to produce virtually no waste when we manufacture our Bionic Play products