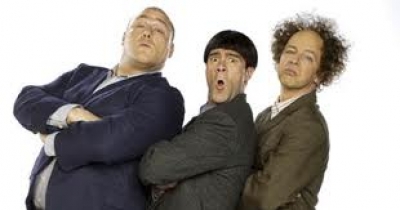 Let me start by saying it is a tough job to redo a classic like “The Three Stooges” but the Farrelly brothers have come very close to perfection and that’s a lot for me to say since I grew up watching “The Little Rascals”, “The Three Stooges” and “Abbott and Costello”. It’s difficult to bring back those memories of yesteryear and the feelings I had when I was a kid but I must admit that this version hit pretty close to home.

The film starts with episode one pretty much the same it did in the golden years of my childhood but of course all of the three episodes tie into each other as a full length movie. A car speeds up to the Sisters of Mercy Orphanage front steps and throws out a duffle bag at Sister Mary-Mengele (Larry David), it starts to move and inside are three somewhat adorable little boys, one with black hair, one with odd curly hair and the other bald. Yes it is the child version to the adult threesome Larry (Sean Hayes), Curly (Will Sasso) and Moe (Chris Diamantopoulos). Ten years later all three boys are living with the nuns at the Orphanage led by Sister Superior (Jane Lynch). Troublemakers of course the sisters will try anything to get them adopted but with no success. Instead when a rich couple Mr. Harter (Stephen Collins) and his wife (Carly Craig) show up to bring home a child they end up with young Teddy.

Twenty five years later the boys are now men and working at the Orphanage as maintenance men getting into more trouble than ever before. When Monsignor Ratliffe (Brain Doyle-Murray) arrives with bad news that the Orphanage will be closing unless the can pay off an $830,000 debt the Stooges are out to save the day. Only thirty days to raise the money Sister Rosemary (Jennifer Hudson) sings their song of goodbye and good luck until abruptly cut off by the ever so mean Sister Mary-Mengele.

Three Stooges set off into the unknown in hopes of saving their childhood home. Not long before getting mixed up with Lydia (Sofia Vergara) and her partner in crime Mac (Craig Bierko) they take over their first job as hit men but little do they know that not all seems as it should be. When things don’t work out as planned they venture into other untraveled territories, at least to them! In the final episode, Moe finds himself on a reality television show with a well-known group of odd balls familiar to arguments and slap stick humor. Larry and Curly are hanging out at the Mid-City Zoo in search of scraps stolen from the polar bear and in the meantime perform the Heimlich on a dolphin which causes a lion to attack Mac who was out to get the guys who failed to kill Teddy their now wealthy orphanage friend from their childhood years.

One problem is they did not know that Teddy was the target but eventually find out that there are even more players involved in this game of potential murder. It isn’t until the actual anniversary party at the Harter home that all truth gets unraveled. Leave it to Nippy to save the day, so to speak as he nosed dived into the breasts of the evil mistress. In the end all is made right when the men return back to the orphanage a few months later. The original Sisters of Mercy Orphanage founded in 1934 is no longer but like they say out with the old and in with the new.

Some great direction and writing in this new rendition based on the old shows of many years ago. A critic friend mentioned to me it would have been nice if the time frame took place back in the golden years rather than modern times and I tend to agree. Although the use of reality stars in the film was nicely placed and utilized, actually a bit more than I would have expected.

Hayes, Sasso and Diamantoppulos are brilliant as “The Three Stooges” all bringing back the memories of my childhood. They are all pretty spot on to the original cast of characters and I’d definitely like to see this version do well and move forward to more episodes. Grant it the baby boomers like me will appreciate this film but will the modern day crowd get it? I think so but to what extent I guess we’ll have to wait and see. If not for a few bloopers here and there, check out in the end of the film and Teddy’s dirty nose, the film would be a reflection to the classic. Lynch, Hudson and the other sisters all do justice to their scenes but it is David that really makes a habit of being hysterical throughout the film. Vergara is a close image to her “Modern Family” role and Bierko is a good side kick to her character but it is the actors playing the Stooges themselves from childhood to adulthood that really make this film close to the original that comes alive for today’s audience. Written and appreciated for all the bells and whistles, slap-stick and physical humor with two and half paws out of four, I’m Jon Patch.

More in this category: « The Cabin in the Woods Lockout »
back to top

We have 338 guests and no members online