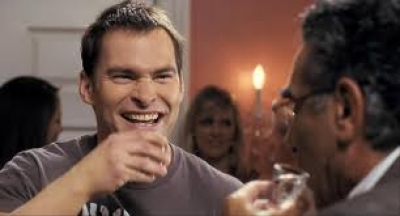 The gangs all here and some have changed yet some have not but either way it was good to visit with them all once again. Jim Levenstein (Jason Biggs) and his wife Michelle (Alyson Hannigan) have an adorable young son Evan (George Christopher Bianchi) but things are just not going all that well in their sex department. It’s seems their marriage is in a bit of a rut! Kevin (Thomas Ian Nicholas) is the housewife so to speak to Ellie (Charlene Amoia) and can’t wait to see the guys when they all return over the coming weekend to East Great Falls, Michigan for their slightly past ten year reunion. Little does Kevin know though that his loyalty will be tested when Vicky (Tara Reid) shows up looking pretty close to the way she did over ten years ago. Oz (Chris Klein) is a sports interviewer for an almost ESPN television show but is more well known for his stent on Celebrity Dance Off. His girlfriend Mia (Katrina Bowden) is hot but questionable. Finch (Eddie Kaye Thomas) is a bit of a traveler with many stories too many to tell or keep track of! And good old Steve Stifler (Seann William Scott), the stifmeister with one “f”, the man everyone loves to hate. The boys are back in town and things will once again never be the same.

Jim’s father (Eugene Levy) has lost his wife three years ago and struggles with the loneliness that is until Jim convinces him to try the online dating scene. Something I never recommended to my father after my mother’s passing but I surely did watch and listen to him struggle to continue a future without his one true love. Jim, Michelle and Evan are staying at his dad’s house and little Kara (Ali Cobrin) who lives next door is all grown up and no longer needs Jim’s services, at least as a babysitter! When the boys arrive in town they all meet at a local bar where the ugly chick in high school Selena (Dania Ramirez) bartends and she’s not ugly no more. After a wild night of drinks with the boys Jim wakes up naked on his dad’s kitchen floor and can’t hide the entire jewels from Michelle and Selena with a glass pot lid. A scene in the film that we the audience really get to see a heck of a lot more of Biggs than we bargained for!

Soon a rivalry between the guys and Kara’s boyfriend AJ (Chuck Hittinger) begins and everything hits land and sea from bikini tops, jet skis, alcohol and poop, nothing is left to chance. It’s not until the guys make a visit to the Falls in which they happen to crash Kara’s eighteenth birthday party does many situations worsen for the guys, especially Jim. A lot of T&A later, Jim and the boys must return some valuable bare merchandise to its rightful home in one piece and intact or else Jim may be sleeping with the cows. A moment straight out of Spielberg’s masterpiece film “ET”. Did you know that in France it’s only considered cheating on a spouse if only they catch you in the act! Probably not true but the French surely have their way!

When Heather (Mena Suvari) appears in the picture Oz discovers that he still has feelings for her even though she is in for the weekend with her boyfriend heart surgeon, Doctor Ron (Jay Harrington). Of course Oz is with Mia who he brought along but soon begins to doubt there are legitimate interests for them to stay together. One night before the actual reunion at Stifler’s house party everything came to ahead, so to speak. Jim’s dad found the beaver he was looking for in Stifler’s mothers (Jennifer Coolidge) room along with puff the magic dragon. We discover that Lacrosse is truly a contact sport and that Jim and Michelle have found their leather side. Overall for the class of 99 the truth has come out along with a number of other things and people before, during and after the reunion. The party’s over but the planning for Stifler has just begun. Nice to see that Nadia (Shannon Elizabeth) has moved past her feelings for Jim after all these years. Or has she? Sherman (Chris Owen) is still the terminator with his target aimed for Loni (Rebecca Field) and her moist lips. In the end the MILF guys 1 & 2 (Justin Isfeld & John Cho) have something to scream about and it may involve a touchdown.

The director and writers have really combined two worlds and two generations in this story that really makes it work for all ages legal enough to get in the theatre that is. A mixture of young and old as the audience gets to join the original gang as they look back on the years comparing life as they see it now versus how they experienced it then. It actually made me reflect to my 20 year reunion that I attended and doubted going to at first but found that it really was nice to go back for a visit and see what the years have done to our youth. Betty White once said she feels 21 until she wakes up, looks in the mirror and sees an old hag looking back. I know what she means and maybe not to the extent of Betty’s years but these kids from the first America Pie get to look back at the years that were once filled with energy, youth, tight skin, dreams of success and the feeling inside that you were unstoppable.

Biggs has aged of course but is still able to pull off the comedic role he once did many years ago but this time we really get to see a new side of him and it’s nothing to be ashamed of. Hannigan really projects her motherly instincts while still maintaining a youthful outer self. Klein looks good and who would have thought the man can dance. Scott once again takes the bull by the horns and leads this story down comedy lane so much so that he really owns this film and the audience reaction is proof to confirm it. Nicholas has aged along with everyone else of course but still maintains much of his original characters attributes. Thomas also has maintained his personality along with a few others. Did I mention I love Coolidge, she is hysterical as always. A very funny, entertaining, a bit revealing yet meaningful, this reunion is truly worth attending not only because of the vast original cast members but the well written and hysterical dialogue that will have you laughing out loud in the theatre. Don’t forget to stay for the credits. Written with two and half paws out of four, I’m Jon Patch.

More in this category: « Mirror Mirror The Cabin in the Woods »
back to top

We have 189 guests and no members online