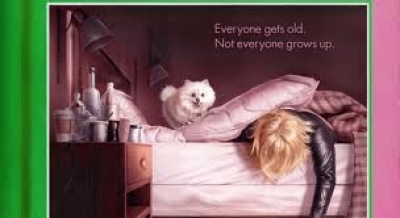 Mavis Gray (Charlize Theron) is recently divorced living in Minneapolis Minnesota with her Pomeranian named Dolce.  She receives an email that her old flame Buddy Slade (Patrick Wilson) and his wife Beth (Elizabeth Reaser) have just welcomed a new addition to the their family, a baby girl.  Tired of living alone, waking up with strange men and drinking her life away Mavis decides to take her writers block as the ghost writer of the Waverly Place series on the road.  It just so happens that the road leads to Mercury Minnesota where she grew up, the small town that smells like fish and the home of her past boyfriend Buddy.

Dolce the dog in travel bag, Mavis behind the wheel of her Mini Cooper, she heads out on her new adventure in search of a lost love that she knows in her mind can be rekindled.  One issue though is that her new adventure just so happens to have a plot, which so happens to be stealing her old boyfriend from his new family.  That’s right the psychotic prom queen bitch is out to wreck a happy home.  When she arrives in Mercury and has set up a meeting with Buddy to chat, she first bumps into an old high school acquaintance at a local bar called Woodys.  It just so happens to be Matt Freehauf (Patton Oswalt) who used to have his locker right next to hers in school.  Does she remember him?  No!  Although after he explains that the jocks beat him up for being gay Mavis of course then remembered.  One issue though, Matt is really not gay and now years later he walks with a cane, has a messed up leg, a bent penis and his closest wet dream is the bourbon he makes at home in his garage.  An odd relationship but for Mavis her new found friendship with Matt seems to work especially when she’s guzzling down his home-made liquor.

Buddy invites Mavis over to the house to meet Beth and the baby, later heading to Champion O’Malley’s to hear Beth, a drummer, play in her band called Nipple Confusion.  The band is truly not confused but of course Mavis is as she embarrasses herself making moves on Buddy.  Ironically the whole time Mavis is in town she’s been writing her last of the Waverly Place book series which of course is a total reflection of her own life right up to this final chapter with Buddy who by the way is known as Ryan in the series.

Not until a party for Beth at the Slade house does the fish smell hit the fan when Mavis’s  obsessed love for Buddy come full force right into the face of Mercury, Minnesota.  It always seems that the truly good looking ones end up with the biggest mental issues causing their world to come crashing down catapulting them hopefully back into a reality check.  Mavis is a very unhappy person and everyone knows it especially her new found friend, Matt.  After a nice chat with Matt’s sister Sandra (Collette Wolfe) Mavis realizes she needs to change, leaving poor Ryan from the Waverly series lost at sea and her alter-ego Kendall out to start a brand new life.

The story makes a lot of sense meaning that you’ll never get lost but it just seemed a bit senseless.  It drags out about a woman still in love with her old boyfriend who will do anything to win him back but it jut seems to drag on trying to build to an excitement that never comes.  The film is well acted of course with the likes of Theron and Wilson, mainly Theron, but it just seems to never truly go anywhere or make a viable point.  I mean I know the whole Mavis to Kendall and Buddy to Ryan connection as Mavis writes her series but I just didn’t think it was strong enough for the big screen but maybe more so movie of the week on one of the network channels.  Even though the writing is well done it just doesn’t seem to truly climax, unlike the scene in which the character Matt does, giving you the audience that final and lasting satisfaction.  Overall, I liked Theron and Wilson, both doing a very nice acting job for their roles but I would have liked it a bit more I think if Theron got her freak on like Glenn Close in “Fatal Attraction”.  Although thankfully in this case the dog was hers and not Buddy’s giving her reason to plan a day in the kitchen over a hot stove.  If it weren’t for the character that Oswalt played the story may have been a bit lackluster and boring like watching paint dry.  Overall, not a bad film thanks to the actors but for the most part senseless and not worth a theatre ticket unless you’re a psychotic prom queen out to look into your possible future.  Written and suggested as a DVD rental with one and half paws out of four by Jon Patch.

More in this category: « New Year's Eve Sherlock Holmes: A Game of Shadows »
back to top

We have 750 guests and no members online