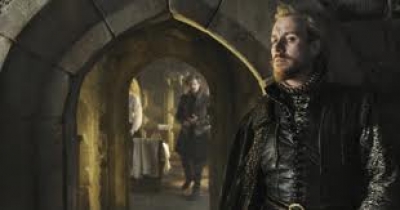 A political thriller about the life and writings of William Shakespeare (Rafe Spall) or should I say, Edward De Vere (Rhys Ifans), Earl of Oxford and the theory that it was Edward who actually penned ink to paper on the many historical plays such as Macbeth and Hamlet.  It’s the dark story behind the life of Shakespeare’s plays that starts out in modern times and evolves into the actual period and reign of Queen Elizabeth I (Vanessa Redgrave).

Playwright Benjamin Johnson (Sebastian Armesto) has been arrested by Sir Robert Cecil (Edward Hogg) and his men because they search for the last writings by William Shakespeare whom they know to be a ghost for Edward De Vere.  He explains that the writings have been destroyed in the theatre fire that was lite when they took him into custody.  Later in the story when Ben is released and he returns to the theatre that has been burnt to the ground he discovers that in the charred remains there sits a metal box, the same box where he had hid the writings.

Five years earlier we flash back to Edward De Vere as he watches one of his plays on stage.  Writing is everything to Edward; his words are acted on stage in a play watched by crowds which gives him power.  Edward is said to be the illegitimate son of the Queen and later in life with Elizabeth he fathered a son, Henry the Earl of Southampton (Xavier Samuel).  The subject of incest is of course brought to light and the fact that the Queen was never truly a virgin.

When the story flashes back another forty years we discover that Edward had been brought to the home of Sir William Cecil (David Thewlis) where he was raised under the ward of the court due to his father’s death.  Eventually he married Williams’s daughter Anne Cecil (Amy Kwolek) but was never happy since he had fallen in love with the Queen, a love that was tragic and forbidden.

Forty years forward in the time of the Essex Rebellion, the Queen is aged and must find a successor but her choices are few.  Edward is still writing the voices he hears in his head for he would go mad if he did not write them down.  Most nobles believed that the arts, plays, were the sign of the devil and therefore took no part in their presence.  As for Edward’s wife she believed that he had become possessed since he sought no power within his heritage but rather did nothing but write, keeping his identity hidden.  Ben was to be his ghost but one evening during a play Will had stepped on to the stage and took credit saying the plays were a work of his, taking credit for Edwards work.  Since Edward needed a hidden identity he let the illiterate William Shakespeare put his name to his writings, having Ben as the go between the two so no one would suspect.  So were the writings of Shakespeare really written by him or were they the works of De Vere?  Throughout time to this day and age we have accredited Shakespeare but this film by Director Emmerich states differently outraging many scholars whom believe Shakespeare is truly the creator of so many poems and plays that depict the tragedy, romance, intrigue, drama and comedy within the lives of all people.

Apparently plays were not the only form of entertainment in those years since Emmerich takes the viewer in the ring of a grizzly fighting several dogs to the enjoyment of Ben and the other patrons to such a barbaric act of animal cruelty that has apparently dated back to the fifteen hundreds.

Could Edward have been King?  Most likely not since there are so many secrets he keeps contained from the ever so interested public.  Of course, Sir Robert Cecil has been conniving trouble from the very beginning in his attempt to contain the power from the Queen during the trying times of the Essex Rebellion.  A rebellion that caused the son of the Queen and Sir Edward De Vere, Earl of Essex (Sam Reid) to be captured, jailed and beheaded under the power of his own mother.  Although when Edward gets the Queen to pardon her son she demands to Edward that their son may never find out that she is his mother.  Thanks to the inner dealings of Sir Robert, Sir James of Scotland (James Clyde) has become King and not to the liking of Sir Robert since King James is an avid lover to the arts.

As we the audiences arrive back to Ben in the tower held captive by Sir Robert, at the time of his release and his return to the destroyed theatre we soon discover, “The life of Henry the Fifth”.  Words are made of breath and breath of life and thanks to Sir Edward De Vere with the help of William Shakespeare and Ben Johnson the legend will forever breathe life for many generations to come.

Probably one of the best films this year if the audience is able to focus on the story and keep track of the events as the director takes us back and forth in time during the reign of Queen Elizabeth.  It does get a bit confusing in the beginning especially but if the viewer loses track it is pretty easy to get caught back up on the story line due to some excellent writing and superb character development.  The sets, score, costumes and cinematography are all magnificent and should surely create a buzz during Oscar time.

Ifans is brilliant as the Earl of Oxford capturing the audience in his every move, unrecognizable from his days as the crazed out roommate to Hugh Grant in “Notting Hill”.  Redgrave is ideal as the Queen as she gives her majesty a sense of authority which falls into insanity into comical into witty all contained into the many faces of a powerful woman as Queen and actress.  Armesto receives quite a bit of screen time bringing is inner tragedy and struggles with Shakespeare to a high level of pressure that he emanates so well.  As for Spall he like the Queen wears several faces but the one of his true being, idiot as Will, really shines through making Shakespeare seem a bit moronic, a job well done by Spall.  Hogg and his hunchback does a frightening job in an excellent way as he connives his way during the times of the Essex Rebellion and when he shares a scene with Thewlis who plays his father the dark side grows even darker all well done to a dramatic undertone.  Reid who is sporting some long golden locks will be a force to watch in Hollywood since this role will truly help catapult his career.  The story contains many actors, young and old, extras and supporting, all that make this film a huge success if not at the box office, since period pieces don’t always do well, then surely in the minds of audiences with a need for a truly intelligent yet controversial piece of art.  Written and thoroughly enjoyed with three out of four paws by Jon Patch.

More in this category: « In Time Machine Gun Preacher »
back to top

We have 442 guests and no members online