Don't be Afraid of the Dark Featured 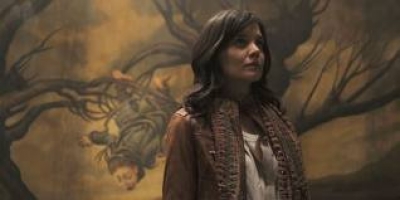 Miramax Films, Gran Via and Tequila Gang present a 99 minute R rated horror, thriller directed by Troy Nixey, Written by Guillermo del Toro, Matthew Robbins based on a 1973 teleplay by Nigel McKeand with a remake release date of August 26, 2011.

Many years earlier in Providence, Rhode Island, an artist named Emerson Blackwood (Garry McDonald) lived in a gorgeous mansion.  Great decision on the location by the film makers since the elements of lighting mixed with dark woods, high ceilings and exotic staircases worked wonders for capturing the oddly scary aspects of such a huge house with many architecturally fascinating designs and carvings.  Working from his basement Blackwood was fond of natural beauty and was known for his drawing of animals.  One evening he chimes for his housekeeper (Edwina Ritchard) and when she hesitantly walks the stairs to the basement below she is tripped falling into a paralyzed state at which time a toothless Blackwood chisels her teeth from her mouth.  Across the room an ash pit is located and he feeds both of their teeth, his and hers, to the voices from inside in hopes they will return his young son.  What happens next is the beginning of a legendary artist leaving a historical mansion for sale on the real estate market.

Years later, a young girl named Sally (Bailee Madison) exits a plane from Los Angeles.  She is the daughter of Alex (Guy Pearce) and has come to live with Alex and his girlfriend, interior designer Kim (Katie Holmes) upon the wishes of her mother.  Sally has already arrived with known mental issues since her mother has raised her on constant medications to help her cope with life’s everyday occurrences.  Of course Sally already has issues with Kim, not liking the fact that she must live with her and not her mother.  The mansion is a fixer up that Alex has invested all his savings on in hopes a one day selling it for a sizable investment under the blessings of the local historical society.  Once laden with moldy newspapers, dead pigeons and poop, the house now shines of cleanliness and hopes of life once again, human life that is!

One day Sally discovers an old basement of which caretaker Harris (Jack Thompson) knew of and tried to hide from the new tenants.  Alex, Kim and Sally discover that it must have been where Blackwood spent most of his time drawing.  A child’s curiosity soon gets the best of her as she begins to hear voices calling her name from the ash pit.  Thinking they are possibly friends she keeps it from her father and returns to pry off the bolts that imprison these voices in the pit.  Finding teeth inside she takes some and places them under her pillow from which appears a silver coin from the 1800’s.

Now that the voices are free they soon have run of the house and Sally realizes that they are really not friendly at all especially after witnessing the attack on a caretaker.  Misunderstood by her father she soon begins to forage a relationship with Kim and tries to confide in her at the koi pond the secret within the house.  Later trying to tell her father the truth, he soon calls in a Psychiatrist (Nicholas Bell) to assess her current issues of anxiety.  But Kim knows that what Sally is experiencing is more than anxiety and wants to get her out of the house but Alex won’t have it.  Kim goes to the library in the city and soon discovers private pictures drawn by Blackwood of these little people stating that one life must be taken and for human teeth a coin shall be given.  Artwork by Blackwood that resembles the drawings Sally has been etching in her books.

The night that Alex is to present the mansion to the historical society is the night which Kim tries to take Sally from the home herself although after the abrupt end to the dinner party the night soon becomes longer.  No one is safe within the house and the only weapon against the creatures is light.  That is until the lights go out!  In a bloody battle into sunrise this house is no longer a home but rather a foreclosure suitable to today’s economy but for the next owner of this mansion they should know that it comes with a tribe of little creatures plus one that have all the time in the world to wait.

A first time director I thought he did a fine job although at times the scenes seemed a bit choppy lacking a bit of flow or consistency to the moments on screen.  The writing for me anyway tends to have a number of holes, for instance why children’s teeth, where did these things come from, and why do they remain in that house, just a few missed elements that I may have over-looked in the screening or that never existed in the first place!  The house was perfect and the score quite sufficient to set the mood of the moments in the story.  Even though the movie is somewhat short in time it felt longer sitting there in my seat since they took the entire beginning of the film to lead up to a climatic and nail-biting final twenty minutes.  It was nice to see a film that has more intrigue and fright rather than blood and gore although there are moments for sure.

The acting in the film was definitely up to par with Pearce giving a believable performance as the father that over-looks pretty much everything since he’s so tied up in the renovation of the mansion.  Actually a bit too blind for his own good since it gave an almost unbelievable feel to the story as he seems to not believe his daughter even though the facts are right in his own face.  Hello, father look down!  Holmes I doubted at first since she seemed a bit stiff but either she loosened up or I did into the middle part of the story since her acting became more involved and believable.  Harris was a bit over-done especially as he falls to the floor after his attack as Mrs. Underhill (Julia Blake) and Sally look on.  As for the child star she is mainly the entire focus of the film and children are sometimes harder to work with than animals and adults on the set and Madison did a superb job in commanding the audience to follow her on this adventure full of ugly creatures, dark hallways, a scary basement and a fight for her life and others.  As for the little creatures or little people which technically they are with a rat like appearance, nice job by the special effects crew since I’ll be surely looking under my bed before I turn out the lights.  “Don’t be Afraid of the Dark” hell yes I will and I’m sure more people will be also after leaving this remade film.  Written and enjoyed with two paws out of four for the most part but not thrilled to death, by Jon Patch.

More in this category: « Conan the Barbarian Redemption Road »
back to top