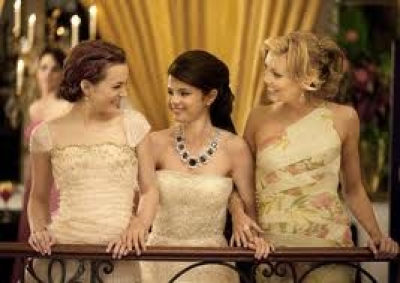 A small town Texas waitress, eighteen year old Grace (Selena Gomez), is about to graduate from high school.  She and her best friend Emma (Katie Cassidy) have plans to vacation in Paris, France.  One problem though her mother Pam (Andie MacDowell) and her step-father Robert (Brett Cullen) want Grace’s step-sister Meg (Leighton Meester), to go along for the ride.  Even though Grace and Meg don’t see eye to eye and Emma and the always perfect Meg definitely don’t see eye to eye, Meg accepts on behalf of her father’s wishes and the fact that she has always wanted to visit Paris, the favorite place of her decease mother.  All are not pleased with the arrangements including care-free Emma who happens to be leaving her fiancé Owen (Cory Monteith) behind in Texas after a fight.

The girls land in Paris and decide to see it via Esprit de Corps which is like seeing all of this beautiful country in one day by tour bus.  The Eiffel Tower, Louvre, shops, restaurants all the beautiful landscapes all bring back memories to my trip to France which I highly recommend for everyone to visit at least once.  Just make sure you spend your time seeing and enjoying it all.  Even though this story takes you on a magnificent visual journey it still does not compare to the atmosphere of being there in person.

As the girls, fighting as usual, get caught in a rain storm they decide to take a break at the Hotel Grand Belle and dry off in their bathroom.  Suddenly their lives take a dramatic shift when Grace is mistaken for heiress Cordelia Winthrop Scott (Selena Gomez).  Emma and Meg know exactly who she is due to a brief bathroom encounter with her and when Grace is mistaken for Cordelia they all decide to go with the flow.  Thereafter the three girls are whisked off to Hotel de Paris in Monte Carlo as Grace takes on Cordelia’s identity, who by the way unaware of this has decided to run away and play hooky for a while.

Grace now takes on her alter-ego Cordelia and due to their exact likeness other than personalities no one knows the better except for the three girls themselves and eventually Auntie Alicia (Catherine Tate).  With a chance of a lifestyle and life in the fast lane of the rich and famous they decide to take advantage of the situation for the next few days or until the real Cordelia shows up.  While on their journey to discovery about themselves and breaking laws along the way Grace falls for Theo (Pierre Boulanger) who I believe I heard her call him Pierre once in the film!  Meg falls for Australian Riley (Luke Bracey) who happens to keep popping up everywhere the girls go.  A bit odd but hey it’s a romantic story!  Emma gets courted by Prince Domenico da Silvano (Giulio Berruti) who happens to be a jerk but helps Emma find herself and what really matters in life.  Ironically what matters for Emma happens to find its way to Paris!

In the end Grace aka Cordelia is in Monte Carlo to auction off an expensive necklace for orphans in Romania.  One major issue though is that the girls lost the necklace and the real Cordelia eventually shows up.  In the end there are many missed connections and eventually some connections that all lead into the truth that no one should ever mess with people from Texas.

Overall the story is directed and written well but a bit flat especially since they spend so much time getting to a dramatic end and then it all too quickly comes together in an uneventful climax.  The cast does a good job but the story just never really becomes motivational or just plain exciting.  Each of the three main characters end up experiencing romance but it’s not until the actual proper introduction that I felt the goose bumps on my arms.  Thankfully it has a soundtrack that I know I would like to own and the cinematography at times is gorgeous and memorable but it isn’t until the whistle in the end that takes your breath away, shining a light of true romance into the story.  I don’t see huge numbers for this film but the young girls will definitely enjoy it and probably try to drag their dates to it as well.  You may want to look for this movie on a DVD soon near you.   Au revoir et salut!  Written by Jon Patch.

More in this category: « Larry Crowne Horrible Bosses »
back to top

We have 167 guests and no members online