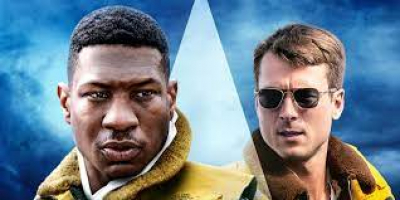 Jesse Brown (Jonathan Majors) gave his life to the military as the only African American man to fly for the naval aviation aboard the USS Leyte. At home he has a wife, Daisy (Christina Jackson) and a young daughter both that he loves more than life. Jesse had a tough life being the only black man flying since many treated him like he did not deserve his position based on the color of his skin. But his buddies and fellow pilots, Dick Cevoli (Thomas Sadoski), Marty Goode (Joe Jonas), Carol Mohring (Nick Hargrove), Bill Koenig (Daren Kagasoff) and a few others looked at Jesse only as the great airman that he was. Yet it was Tom Hudner (Glen Powell) that Jesse forged a brotherhood with, creating a unique and honest relationship.

In 1950, obviously racism was an everyday event for a black man no matter how great he was in giving his life for his country. Although his fellow pilots respected him some other soldiers on the ship did not, but it was something that Jesse dealt with all his life. Although the friendship between Ensign Jesse L. Brown and Tom was like no other as they took to each other fairly quick. It is not until the war that was unknown to history took place, to support the United Nations Forces in the Korean sector that the men knew their mission would be the most dangerous orders they have ever received. Yet on December 3, 1950 Ensign Jesse L. Brown gave his life for his country but not without the efforts of Tom to try and change the outcome.

It is a wonderful story about Jesse L. Brown, who gave all he could to fly as a naval aviator for his country. Sadly, even in this day some people still continue to look down on others because of the color of their skin and not for the ethics, skills and kindness that they exude. Jesse gave all he has to his wife and child but he gave his forever to the country that whispered behind his back or belted out racial slurs to his face. The story is a bit long but well written to pinpoint the career of Ensign Jesse L. Brown but also it highlights the ignorance by some that thought he should not have the equality of his white squadron fighter pilots. The direction of the story is great as is the score and the cinematography which is amazing.

Powell carries his leading role well but it was not until the end of the film did, he actually seem to show expression in his face. As a handsome man he always seemed to have a bit of a smile on his face that lacked expression. Jonas was truly the levity of the story and he does a nice job in keeping it up while still giving a wonderful performance. All the actors do a nice job with their roles but it is truly Majors that carries this film with his skills as a brilliant actor. I have always been a fan of his and the sky is the limit. This man’s star will continue to shine brighter every day in his career. No animals other than some birds to talk of in this film.

More in this category: « White Noise Violent Night »
back to top

We have 227 guests and no members online