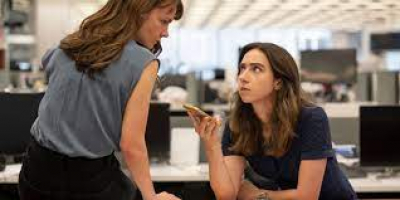 Universal Pictures, Annapurna Pictures and Plan B Entertainment presents an R rated, 128-minute, History, Drama, directed by Maria Schrader, screenplay by Rebecca Lenkiewicz and based on the New York Times Investigation by Jodi Kantor and Megan Twohey with a theater release of November 18, 2022.

New York times reporters Megan Twohey (Carey Mulligan) and Jodi Kantor (Zoe Kazan) broke the story with the help of many victims, some that wanted to speak out but many that were afraid too about the many acts of sexual assault by Mr. Miramax Films, Harvey Weinstein. This valuable story by these two brave women that were harassed and threatened during the investigation is what eventually started the #MeToo movement. Many women from Rose McGowan, Gwyneth Paltrow, Ashley Judd to many other women in the film and entertainment business were assaulted by Weinstein but at those times no one wanted to listen. Finally, because of these two reporters along with other Times people Rebecca Corbett (Patricia Clarkson), Dean Baquet (Andre Braugher) and others, eyes in the industry were finally opened to the criminal acts hidden with cover-ups and payments surrounding the hundreds of women affected.

This story tells the truth about the power of high executives, people able to control others to hide cover-ups and crimes within their money and power obsessed world. The film tells a part of history and is very well depicted by the actors that portrayed the roles of employees of The New York Times and also the women that were abused. This well written account may not be seen by a large audience but in my book, I hope I am wrong. This story needs to be seen by all women and hopefully men so they understand the justification of paying for crimes committed no matter who you are or how powerful you may be.

I personally struggled during this film mainly because on another scale I too lived this act of violence by a powerful organization that uses their power and money to hide crimes committed under their institution. Almost a mirror image of a women in the film going into surgery and wanting to tell her story I was one that did the same over three years ago. Renal failure, out of control and in ICU, I was not sure I’d be getting out of the hospital, of course, nor were all of my doctors. So, I too decided to tell my story of being molested at the age of 11 by a parish priest in my neighborhood. My story which the Wall Street Journal covered twice along with other victims that came forward was printed yet unlike other states Pennsylvania decided the victims had no rights to their day in court and the Pennsylvania Supreme court blocked all of our cases. Why? Maybe they were bought off, maybe they were protecting an institution that is supposed to preach about God and good but all they did was make it ok for the Catholic Church to continue their attacks on young children, boys and girls. Enough said, but this film “She Said” needs to be seen by everyone to prevent this injustice from happening to others. In my case I could have taken a settlement but I decided to fight for all the years of pain and nightmares that haunt me to this day. I, we victims, deserve our day of justice to lock away not only the perpetrators but the higher ups that continue to cover up or pay off crimes committed on innocent people and in my case, children. All of us, victims in Pennsylvania still hope to have our day in court just like everyone else in the country.

My praise goes to everyone that helped to film this story it is not easy to bare your soul but sometimes it is the right thing to do in order to make change happen for the better and sometimes better late than never. As the saying goes no one is above the law and those are words that need to be etched in stone forever. Please support this film and the #MeToo movement.

More in this category: « Black Panther: Wakanda Forever The Fabelmans »
back to top