Minions: The Rise of Gru Featured 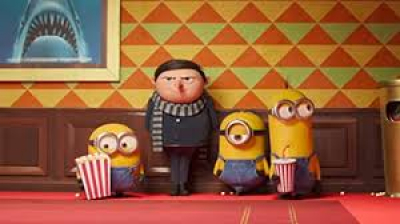 Minions: The Rise of Gru

This is the story of how Gru (voice of Steve Carell) grew up to become one of the biggest villains known to mankind. It takes place in the 1970’s, bell bottoms, long hair, cool music. In elementary school Gru was not the most likeable child with his dreams of growing up to be a villain. He lived with his mother Marlena Dru (voice of Julie Andrews) and eventually took in a slew of minions to work in his basement on special projects but Gru’s special three with an added new one was his standby’s when needed, Kevin (voice of Pierre Coffin), Stuart, Bob and the newest edition to the Minions, Otto, a young lad sporting braces with a need to constantly please his fellow Minion’s and Gru.

Gru had a dream of one day joining the Vicious 6, Belle Bottom (voice of Taraji P. Henson) the leader of the pack, Jean Clawed (voice of Jean-Claude Van Damme), Svengeance (voice of Dolph Lundgren), Stronghold (voice of Danny Trejo), Nunchuk (voice of Lucy Lawless) and the original leader Wild Knuckles (voice of Alan Arkin) he had been cast out of the V6 due to being too old. Yet when the V5 decided to take auditions for another member they had invited Gru but when a kid showed up, they cast him away. As of way of showing is evil side Gru decided to steal a special piece of jewelry that contains special powers, using a device made by Dr. Nefario (voice of Russell Brand) who ran the record store above the V6 headquarters. Dru being successful the race was on by the now Vicious 5 to get it back. Along with Kevin, Stuart, Bob, even Otto and an unlikely friend in Wild Knuckles, Gru had a fight to the end to claim victory, but did he? Even with the help of acupuncturist Master Chow (voice of Michelle Yeoh) and her time spent teaching the Minions how to fight it was a difficult end for some and not for others. Either way this was the beginning to the evil villain Gru.

I liked the story a lot and you can’t complain about the animation, Illumination is stellar. In my opinion when the Minions movie came out it was not too good mainly because you had trouble understanding them for over 90 minutes but with the placement of Gru and other humans the mix works for sure. The music was amazing especially if you remember the 70’s like I do! The voices were good although at times I got a bit lost in some of the V6 characters and of course not always understanding the Minions. But either way the movie is a nice length and will definitely be a fun day at the movies for kids and parents too. Be prepared though to experience a lot of Minion butt! I don’t believe any animals were harmed in the making of this film not even Gru’s vicious little pup.

More in this category: « The Black Phone Thor: Love and Thunder »
back to top