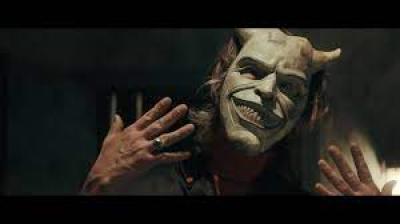 Universal Pictures, Blumhouse Productions and Crooked Highway present an R rated, 102-minute, Horror, Thriller, directed by Scott Derrickson screenplay by Derrickson and Robert Cargill and based on the short story ‘The Black Phone’ by Joe Hill with a theater release of June 24, 2022.

Finney (Mason Thames) is your average young man of the late 70’s with friends, ball games and bullies. His sister Gwen (Madeleine McGraw) is a bit of a tom boy with a tough shell especially since she takes a lot of abuse from her alcoholic father Terrence (Jeremy Davies). Her father treats her worst than Finney because she reminds her father of their late mother and the abilities she had to feel and see things about other people and places.

The Grabber (Ethan Hawke) is a serial killer that takes on the role as a magician to lure boys into his black van then later shut them in a sound proof basement to torture then eventually kill them. After several young boys Finney knows from school end up disappearing the local law, Detective Miller (Troy Rudeseal) and Detective Wright (E. Roger Mitchell) are involved in trying to find out what is happening to them and when Finney becomes a victim as well, Gwen is asked to help in his rescue. Thanks to one of Finney’s friends from school, Robin (Miguel Cazarez Mora) he tries to give Finney some tips about standing up for himself.

Once in the cold basement taken by The Grabber, Finney begins to get calls on an old black broken phone located on the wall near his mattress but what makes the calls different are the facts that they are the dead boys previously killed and buried by The Grabber. In the end, it is up to Finney to come up with a way to survive, he has the boys on the black phone, his sister and the Detectives all trying to help but overall, it comes down to the will to survive. But the question is, if Finney has that will?

The story is well directed and written so much so that made it a bit too real for me personally. I had a hard time for many reasons especially being a boy of the 70’s that lived through and had to triumph through a very similar story. It really hit home but I stayed to review the film because even though many of those wounds are still open to this day, I decided I can’t let them control me. So, I did not write the review after the film but instead went home to try to deal with the pain in my own way. I now write this review and state that the film is not gory but realistic in a way that shows how easy it is to kidnap children then and now. More parents need to be aware and so do children that the words stranger danger is powerful. As a thriller and horror, the film is very well done especially because it lies on the side of yes this could happen and it does! Be prepared for one scary time watching this story on the big screen. There was a dog used in the story and obviously used to play the side of big and bad. Be aware of your surroundings at all times because one day this story could be about you!

More in this category: « Elvis Minions: The Rise of Gru »
back to top

We have 466 guests and no members online