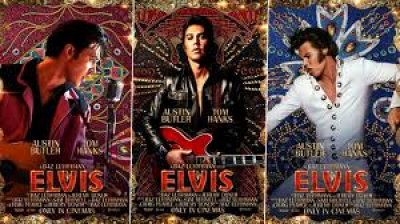 The Man, the Legend and the King of Rock and Roll, took America by storm and eventually thanks to technology the entire world. Elvis (Austin Butler) grew up in Tupelo Mississippi and definitely a mama’s boy. Gladys (Helen Thomson) took good care of her son and she knew he would grow up to do great things but when he grew up as a performer, she wondered how life and herself would deal with the fame.

Elvis grew up around gospel and the black community hence this is what gave him the talent and soul to sing and as we know move in ways that would shake women to the core so much so that undergarments would adorn the stage. His life though took a huge turn when he met promoter Colonel Tom Parker (Tom Hanks), kind of a mystery man that everyone knew but no one really knew anything about! Well, when he got his fingers into the likes of Elvis, life for a young man from Tupelo changed forever. Women fell in love with him and his songs started to play all over the radio industry and when the money started to come in as well, Elvis moved his mother and father (Richard Roxburgh) to Memphis, Tennessee which was the birth of Graceland. His career soared with friends and influences like B.B. King (Kelvin Harrison Jr.) and Little Richard (Alton Mason) but it was a white man with a soulful voice and hips that shuck like an earthquake is what made the money and fame come tumbling into his life.

Yet, even though the Colonel was booking Elvis everywhere and eventually in Vegas the Colonel was not without keeping money and making arrangements for his own deep pockets which involved gambling debt. There is nothing worse then losing the love of your mother but when his mom passed away Elvis took it hard but in order to help things along the Colonel had made his father his manager. In his early years his way of moving those hips and popping his pelvic area was too much for local law men. Elvis stood his ground even when he married Priscilla (Olivia DeJonge) and eventually had a daughter Lisa Marie but as we know it became too hard for Priscilla to accept the ways Elvis was living his life. In the end, it is amazing to learn so much about Elvis but even more so the role the Colonel played in his life.

I really enjoyed the film especially the songs and dance. The direction was very well done as was the writing but what I think hurts the story is the fact that it is a bit too long. The photography, the sound track, the wardrobes and the magic of Elvis on stage was superb to watch but I did feel that the film lags in the second half slightly and not so much because of the film but a half hour shaved off the story would have helped. The cast was brilliant but obviously the leads are the ones that make the story. I was not personally familiar with Butler but he was superb in the role as Elvis in all aspects including his look. Tom Hanks also was amazing as he played a so-called fair man but with a sleezy under-side. If you love Elvis and who doesn’t still then you will love this film and hopefully it will shed light on the young generation of today just how the King of Rock and Roll changed the world. No animals were depicted in this film!

More in this category: « Lightyear The Black Phone »
back to top

We have 331 guests and no members online