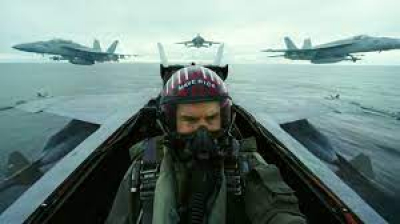 Paramount Pictures, Skydance Media, and Don Simpson/Jerry Bruckheimer Films present a PG-13, 131-minute, Action, Military, Drama, Directed by Joseph Kosinski, Story by Peter Craig and based on the characters created by Jim Cash and Jack Epps Jr. with a theater release of May 27, 2022.

Wow! Where do I begin? This sequel from the 1986 film stands alone and is absolutely brilliant. When it opens to Capt. Pete ‘Maverick’ Mitchell (Tom Cruise) still a Captain, because he chooses to be, flying a futuristic looking out of this world plane that he flies past Mach 10 is outstanding. The visuals just of this flight alone in IMAX is breath-taking. But he flew against orders, as Maverick often does, which landed him to his original stomping grounds into a program as an instructor not a flyer. This was a hard hit to Maverick’s ego since all he wants to do is fly.

Back in his home stomping grounds from 30 years ago Maverick walks into a bar and no this isn’t the opening of a joke but rather the retrieval of a lost love, Penny Benjamin (Jennifer Connelly). While hanging out in the bar Maverick gets to observe the “Top Gun” squad and their behaviors among others. Obviously, it was not good at first! Lt. Bradley ‘Rooster Bradshaw (Miles Teller), the son of his best buddy he lost in 1986, Lt. Natasha ‘Phoenix’ Trace (Monica Barbaro), Lt. Robert ‘Bob” Floyd (Lewis Pullman) the somewhat awkward soldier, Lt. Rueben ‘Payback’ Fitch (Jay Ellis), Lt. Mickey ‘Fanboy’ Garcia (Danny Ramirez), Lt. Jake ‘Hangman’ Seresin (Glen Powell) the egotistical know it all, Lt. Neil ‘Omaha’ Vikander (Jack Schumacher), Lt. Billy ‘Fritz’ Avlone (Manny Jacinto), Lt. Callie ‘Halo’ Bassett (Kara Wang), Lt. Javy ‘Coyote’ Machado, Lt. Brigham ‘Harvard’ Lennox and Lt. Logan ‘Yale’ Lee (Raymond Lee), all part of a top military naval mission that only a chosen five will be picked to fly in. One problem and it’s not that Maverick is their instructor but the mission is almost impossible to live through.

Admiral Tom ‘Iceman’ Kazansky is the reason Maverick and his right-hand man Wo-1. Bernie ‘Hondo’ Coleman (Bashir Salahuddin) is there to take on this mission under the control of Admiral Beau ‘Cyclone’ Simpson (Jon Hamm) and Admiral Solomon ‘Warlock’ Bates (Charles Parnell) but what happens in the end is totally unexpected but one hell of a scene to watch on the big screen.

Everything about this film is great, the direction, writing, score, cinematography, and the military fighter jets, the war games right down to the military mission on foreign land is perfection. As my buddy Sal said to me during the film, he had goose bumps, the tears, the romance, the character development and the flying is superb. All the students are perfectly cast, Connelly looks better than ever, Hamm is fantastic and I like Parnell but also an Admiral I would have liked to see a bit more conflict with Hamm’s decisions for Maverick. Kilmer short but meaningful for sure and the supporting cast and extras are the seal of perfection all in one. This was obviously the right choice to make this sequel and Cruise has hit a grand slam as this is surely one of if not his best film ever. The only animals portrayed in the story is a flock of birds that cause engine problems for one particular plane during lessons with Maverick. I look forward to seeing it again, now it’s your turn, this will be a box office smash for sure.

More in this category: « Men Jurassic World Dominion »
back to top