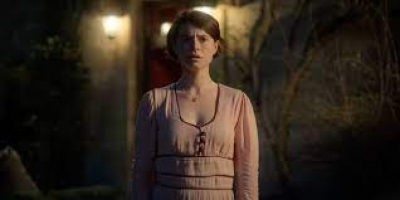 A24 and DNA Films present an R rated, 100-minute, Drama, Horror, Sci-Fi film directed and written by Alex Garland with a theater release of May 20, 2022.

Harper (Jessie Buckley) has decided that she does not want to be with her husband, James (Paapa Essiedu) any longer. After a violent fight in their apartment in London James was locked out but soon thereafter Harper saw James falling from above to his brutal death below.

Not long after, the death of James haunts her, Harper decided to take a trip to a rented home in the countryside of England. The renter, Geoffrey (Rory Kinnear) was friendly yet bizarre at the same time but the country home was perfect and Harper felt it would help her to cope with all her anxiety and nightmares. Once settled in Harper decided to take a hike through the woods which only added to her tensions when someone was following her. Not too much later she discovers an odd naked man in the front yard by the apple tree. Once the police (Sonoya Mizuno and Sarah Twomey) show up Harper believes all will turn better since the naked man was taken away. She chatted with her best friend Riley (Gayle Rankin) on the phone and decided to continue her stay.

Another walk into town where she meets a strange boy, Samuel (Zak Rothera-Oxley) as well as the local priest but it’s not until she enters the local pub that life in the country again turns into a psychological thriller. Once back in her home where she thinks she is safe from the outer elements it is just not so. What happens from this point on is shear terror and Harper must fight for her life. Overall, in the end she is faced once again with her own personal fear which leaves the audience to decide what, when and where but not to forget the why?

I thoroughly enjoyed this film which keeps the tension and stress built up inside my body as I sat on the edge of my seat. It was a thriller that at times was off the wall and a bit gross, thinking what the hell would I do! I really thought the direction was brilliant as well as the music which contributes extensively to the audience tension and the cinematography all of which were truly captivating but in the final end the writing leaves you guessing a bit but you can interpret this climax in your own way of course. I have definitely summarized what the ending meant to me which leaves my curiosity closed. But the title of the film still leaves me a bit perplexed!

Buckley was amazing making you feel her anxiety and pain. Essiedu is not in the film a lot but the parts that he is in he definitely commands the scenes. Kinnear is a bit odd and unpredictable which plays perfectly with his character. Rankin is the perfect friend and Rothera-Oxley is just plain scary in his own right. Albeit in the end, this film kept my attention the entire time and although the ending is extremely strange and grossly graphic it fits well with the whole later half of the story. Sad to see what happened to the raven but if unfixable best to put it out of its pain.

More in this category: « Firestarter Top Gun: Maverick »
back to top

We have 223 guests and no members online