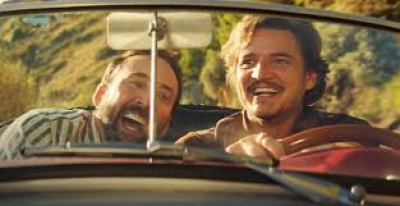 The Unbearable Weight of Massive Talent

Lionsgate and Saturn Films present an R rated, 105-minute, Action, Crime, Comedy, directed by Tom Gormican and written by Gormican and Kevin Etten with a theater release of April 22, 2022.

First off if you like Nicolas Cage you will love this film and if you don’t like him, you will still love this film. Nick Cage (Nicolas Cage) is divorced from his wife Olivia (Sharon Horgan) but they share their daughter Addy (Lily Mo Sheen) who happens to be turning sweet sixteen. All Nick talks about are his films throughout his life and pretty much nothing else hence why his family hates being around him. But he’s not a bad guy, just hard on his luck and in major debt. Yep, that seems like Nicolas Cage! When he’s up for a big movie part but fails, his manager Richard Fink (Neil Patrick Harris) tells him he got him booked to attend a billionaire’s birthday party on an exotic island. At first it was a no but then a final yes, he needs the money.

Off the plane, he eventually meets the birthday man, Javi Gutierrez (Pedro Pascal) who is obsessed with Nick Cage and knows every movie the man starred in. Javi has a motive besides his birthday though and he is not sure if Nick would consider joining the project. Meanwhile a young girl, Gabriela (Alessandra Mastronardi) has been kidnapped because of who her father is in the political world and the CIA, Vivian (Tiffany Haddish) and her partner Martin (Ike Barinholtz) have approached Nick for his help to save the girl from captivity somewhere on Javi’s compound. In the end, throughout some twists and turns Nick finds out that even without or with a career, family always comes first.

This film is brilliant, hats off to the director and writer for bringing “f***ing Nicolas Cage” to the big screen in a movie role that should absolutely revive his career again. I’ve never been a big fan of Cage but after this story I have turned to like him a lot. There is action, chases, explosions, shot outs, car crashes and crime. Yes, there is a bad guy in the story even without the paranoia by Nick and Javi. Great cinematography with a fitting score this is one film that is truly worth a second watching.

Cage is truly outstanding even when he meets his alter-ego. Pascal is superb and between the two of them, him and Cage they make a great comedic team. The wall scene alone is hysterical. Haddish and Barinholtz play more of a straight character with little comedy but she pulls it off well. Harris has a short scene as does Scipio and Mastronardi but they are perfect supporting characters as is Sheen and Horgan. The film is so different as it deals with reality and fantasy all at the same time. A definite must see as Cage definitely takes this role and runs right to the box office with it.

More in this category: « Fantastic Beasts: The Secrets of Dumbledore Doctor Strange in the Multiverse of Madness »
back to top