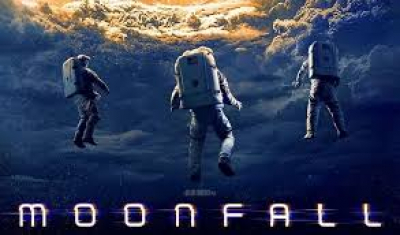 Movie Review written by Jon Patch with 2.5 paws out of 4

January 12, 2011, Astronauts Brian Harper (Patrick Wilson), Jocinda Fowl (Halle Berry) and one other were working in outer space on a damaged satellite that is until an unknown alien source destroyed the satellite killing one of the astronauts and injuring the other two. Of course, when the two astronauts return to earth the government fires Brian, creating a cover-up and blaming him for the death of one of his partners.

Ten years later, Jocinda is still working for NASA and has discovered that the moon is orbiting off its axis for some unknown reason but if it continues to do so it could cause total devastation to earth. Meanwhile, a want to be astronaut and conspiracist KC Houseman (John Bradley) has found out also that the moon will eventually crash into earth but of course no one will take him seriously. Brain an ex-astronaut, drunk, in debt, and divorced from his wife and kids is KC’s only alternative since posting the information on social media which got no one’s attention but NASA and at that time they weren’t believing the information. Thereafter NASA discovered a hole in the moon and living within the hole was an alien life force that was causing the moon to fall into earth.

With the world on high alert and Jocinda now in control to save the planet and destroy the alien life force she seeks the help of Brian after finding out he was not to blame for what happened ten years ago. Brian has already come to terms with KC so he has become a major player in their hopes to save the moon and in turn save earth but when they fly back into outer-space in hopes to destroy this monster alien force what they find within the moon is something they never dreamed of, well, except for KC. But, will they have enough time since earth is already falling apart. Time is of the essence for Jocinda, Brian and KC to kill the alien and save the moon ultimately saving earth, themselves and their families left behind on earth.

I really enjoyed the film, though it was too long, had some bad special effects mostly on earth, bad supporting actors like Doug Davidson who played Eme Ikwuakor, Jocinda’s ex-husband, some bad direction and some bad writing. On a good note, the film is thrilling at times, with a good score and some better special effects while in space. I was disappointed by such a small cast and even a smaller number of cities being destroyed. Besides all that I did enjoy the movie even though my high hopes fell to a slightly below medium level.

I did like Halle Berry and her character as I did Patrick Wilson whose actual family lives here in Tampa Bay where I live. They both did justice to their roles but the one person I was enamored with was John Bradley who added some levity yet in the end heroism to the story. It is surely not the worst outer space movie I have seen since there is a lot going on most of the times but the lesser moments like the cameo by Donald Sutherland could have been left on the editing floor. Thankfully KC’s mother Elaine’s (Kathleen Fee) cat survived and was somewhat of a hero himself.

More in this category: « Scream Jackass Forever »
back to top

We have 238 guests and no members online