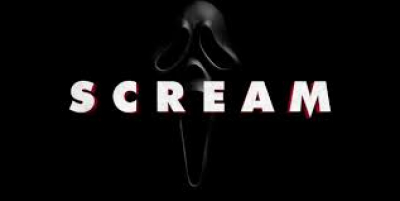 Tara Carpenter (Jenna Ortega) is home alone, of course, when she receives that infamous phone call from a spooky voice asking her what her favorite scary movie is? From that moment on if she doesn’t answer correctly her best friend Amber Freeman (Mikey Madison) will die or maybe Tara will, it becomes a guessing game until the knife penetrates the skin several times on the first victim from a scary person in a ghostly mask.

It’s not long before Tara’s friends, locals Wes Hicks (Dylan Minette), Mindy Meeks-Martin (Jasmin Savoy Brown), Liv McKenzie (Sonia Ammar), Chad Meeks-Martin (Mason Gooding), along with Tara’s sister Sam Carpenter (Melissa Barrera) and her boyfriend Richie Kirsch (Jack Quaid) whom live out of the Woodsboro area find out about the attack. Sam and Richie immediately drive into town to be with Tara but little does her sister know that Sam harbors a disturbing secret about their mother who happens to be out of town at the moment.

Sam concerned about the same type of masked killer back in Woodsboro after the original killings twenty-five years ago, she seeks the professional help of Dewey Riley (David Arquette) who is now a retired police officer. Not long before more people start dying Dewey reaches out to Gale Riley (Courtney Cox) who is a morning personality in another city filling her in that a copy cat killer is back in town. Who better to call next, Sidney Prescott (Neve Campbell) the originally “Scream” victim from the start of the Woodsboro serial killings? In a fight to find the killer before it’s to late more and more people are dying but hey that’s Hollywood! No animals appeared in this film so none were butchered like the humans were in this old but somewhat new story.

I waiver back and forth on this film whether to give it a 2, 2.5, or a 3 but I went with the 3 mainly because if the audience in this Gen Z generation have not seen the franchise before than this “Scream” reboot will be absolutely new for them. Under that premise this film is well done, with its spooky moments of what lies behind that open door scenario or the creepy music getting louder but nothing happens. The director does a nice job of keeping the audience guessing so on those moments alone the film is worthy even with the mentions of previous known scary movies and the comparisons to the horror these kids are now living.

It was great to see Campbell, Cox and Arquette back for more slasher moments on the big screen even if only for a short period. They all look great all grown up. Ortega was great in her role but geez her next role should be Wonder Woman since no matter what this girl gets hit with, she still keeps coming back for more. Barrera who plays Tara’s somewhat psychotic sister along with Quaid bring in a familiar yet uncertain similarity to the older players from 25 years ago. Marley Shelton is back as the Sherriff this time rather than a Deputy and her son in the story, Minette, has a shower scene that could have been memorable but it wasn’t. Kyle Gallner has a short-lived life that might have been written into the plot much better than a quick goodbye. As for the rest of the actors who play friends and students, they help to keep the party going but not until the end will you be shown who wears the droopy ghost face.