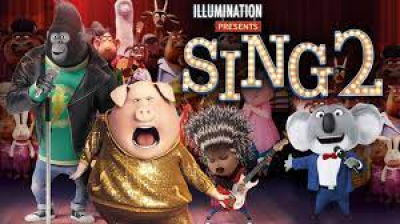 Buster Moon (voice of Matthew McConaughey) has successfully been running an Alice in Wonderland musical with Meena (voice of Tori Kelly) in the leading lady spot at his New Moon Theater. But he has always thought his little theater success could compete with other shows in Redshore City. So, Moon, shy Meena, mother pig Rosita (voice of Reese Witherspoon), Rocker porcupine Ash (voice of Scarlett Johansson), non-dancer gorilla Johnny (voice of Taron Egerton) along with porcine imaginator Gunter (voice of Nick Kroll) all head to the Crystal Tower Hotel to audition for the big mogul wolf Jimmy Crystal (voice of Bobby Cannavale) to bring their act into the big city. Oh yes also tagging along is one of my favorite characters Miss Crawly (voice of Garth Jennings).

Once they arrive at the Tower, Moon tries to get a meeting with Mr. Crystal but is turned away. Yet where there’s a will there’s a way and Moon and the gang get an audition for all about 10 seconds. Mr. Crystal was looking for something big, something never done and thanks to Gunter and his idea, Moon and the gang get a show supported by Crystal enterprises. When one major problem with Rosita rears its ugly head, it is Porsha Crystal (voice of Halsey) that steps up to the planet. With a voice like a goddess but acting skills of a rock once again the musical is in trouble. Yet when Moon promises Mr. Crystal that Clay Calloway (voice of Bono) will be coming out of hiding since his wife’s death that has bought Moon more time. Yet the problem is no one knows Clay but Mrs. Crawly takes a shot at speaking to him with no luck. This scene is hysterical as Mrs. Crawly flees in a rented sports car for her life. So, in order for the play to go live Porsha and Clay need to be in the musical, the big question is if Moon can pull it off.

I loved this second version of Sing and could watch it several more times, I already watched it twice and loved it both times. The animation is outstanding and the vocals of the artists are all phenomenal along with the direction and writing of Sing 2 that makes it even better than the first film. There are so many other greats in the film Alfonso (voice of Pharrell Williams), Nooshy (voice of Letitia Wright), Klaus Kickenklober (voice of Adam Buxton), Norman (voice of Nick Offerman) and Suki (voice of Chelsea Peretti) just to name a few others. All animals in this story are aware what their roles were so none were hurt beyond their approval to do their own stunts. Have a fun time and enjoy some great music and laughter this holiday season and take the entire family to Sing 2.

More in this category: « American Underdog The Matrix: Resurrections »
back to top