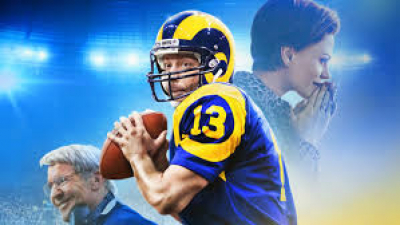 Lionsgate, City on a Hill Productions and Kingdom Story Company present a PG, 112-minute, Biography, Sports, Drama, directed by Andrew Erwin & Jon Erwin, screenplay by David Aaron Cohen and based on the book “All Things Possible” by Kurt Warner and Michael Silver with a theater release of December 25, 2021.

American Underdog is a true Heroes story! Directed by Andrew and Jon Erwin this film tells the true-life story of Kurt Warner and this is a Super Feel-Good Film!

Quarter Back Kurt Warner is an NFL MVP Hall of Famer and a true American Hero. This film captures everything grounded, loving, committed, determined and charming characteristic about this amazing man. I'd truly recommend this as a family film because there are many lessons to observe and be learned. His true-life story follows from college ball into failing to make the NFL to working as a stocking clerk in a local supermarket to Arena Football and finally into the NFL.

There's never a dull moment as you are taken through his everyday struggles of hard work, falling in love, doing what’s right by his family and never giving up on his biggest dream of showing that he has what it takes to be in the NFL.

Anna Paquin who plays his wife gives an amazing performance along with Dennis Quaid who plays coach Dick Vermeil when he finally makes the NFL and has to prove himself as one of the best Quarter Backs in history.

I highly recommend this film for people of all ages and sports enthusiast because there is never a dull moment and the thrills just keep rolling as the story progresses.

So, when was the last time you were at a film and it ended and the entire audience applauded?? Cause that's exactly what I witnessed and the overall feeling of delight from the audience was heartwarming.

More in this category: « Spider-Man: No Way Home Sing 2 »
back to top

We have 761 guests and no members online