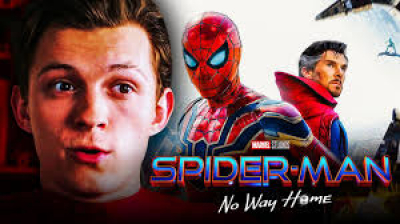 The story picks up where it last left off with Mysterio (Jake Gyllenhaal) before he died screaming out the true identity of Spider-Man for all the world to hear. So, you have to imagine life for Peter Parker (Tom Holland) yes Spider-Man, his girlfriend MJ (Zendaya) and his best friend and trusty side kick Ned Leeds (Jacob Batalon) along with Aunt May (Marisa Tomei) are all living the life in the public eye. Things are not so great when everyone knows you’re Spider-Man so at school and on the streets and even at home people never leave you alone. As for Aunt May she is dealing not only with the instant unwanted fan but a breakup with Happy Hogan (Jon Favreau). So, Peter has an idea to go to Doctor Strange (Benedict Cumberbatch) and ask him to find a spell to go back in time so people would forget that he is Spider-Man. But many things go wrong and doorways have opened from other dimensions.

Well not to spoil the fantasy in case you do not want to know but sometimes things from your past tend to resurface, but, in this case, even more so when what was once old is new again. Villains, heroes and others from worm holes in the universe of lives once lived are all brought back in the present world and before sending them back where they came from Peter’s heart wants to help them to be the men they once were before walking on the dark side of their lifetimes. One problem though is some don’t want to be fixed or sent back so the war of past, present and future battle for what is the right thing to do. Albeit if in the end life for some goes back to the very beginning.

It’s a great story and hats off to the wonderful direction and writing. Usually when you add so many characters and smash them all into one story the story becomes cluttered and difficult to follow but not here this is absolute perfection. There really isn’t a dull moment or one that makes no sense but there are some tear-jerking moments so come prepared. The special effects, CGI are superb as is the score and of course the outfits are phenomenal not to mention certain characters look better in the outfits now then back years ago, not to mention any names but I’m sure you’ll figure it out.

For those interested obviously Holland is all grown up and working out as well, yet his acting skills do not take a back seat to anything, he still plays Spider-Man quite well even though Tobey Maguire was always my favorite Spidey but Holland is a close second. Zendaya fulfills her role as the girlfriend who is in love but it is the friendship that Holland has with Batalon that stands out. As for Tomei she really knows how to make the audience react. I can’t mention all the other big names in this film since it will give too much away but trust me, they are all perfection. Overall, this new Spider-Man is sure to make a large dent at the box office because it deserves to since it does not disappoint at all. No animals in this film except for a big lizard and any hurt on him is because he deserves it. Remember do not leave until the final credits roll trust me you will be glad you stayed to the very end.

More in this category: « The King's Man American Underdog »
back to top