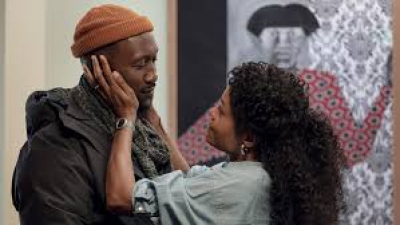 Set in the not to distant future, artist and businessman Cameron (Mahershala Ali) meets a young woman, Poppy (Naomie Harris), on a train over a piece of chocolate. Years pass and Cameron is married to Poppy with a son Cory (Dax Rey) and another child on the way. During this time Cameron is diagnosed with a terminal illness by Dr. Scott (Glenn Close) but rather than breaking the news to his family his doctor has offered him an alternative. Even though Cameron’s life is coming to an end, in the eyes of his family they will never know he was even sick nor dying.

Dr. Scott and her associates, Dalton (Adam Beach) and Rafa (Lee Shorten) are able to replicate Cameron, his features, voice, memories but without a deadly illness. She even allows Cameron to look into another person’s life in which this clone, Kate (Awkwafina), who is also dying exchanged bodies with another to live her life and raise her daughter. Cameron figured since he was going to die, having an exact image of himself with all life’s memories step in to take care of his family was the best answer. Yet he struggles with his decision, since meeting Jack aka the new Cameron, he feels like a stranger will be taking his place in life. Against the company’s rules Cameron wanted one last wish and that was the ability to say goodbye to his son and wife, hold them, kiss them, discuss life and have that last chance to say his goodbye in his own way before his life comes to an end and the new Cameron moves in.

I enjoyed the film which the concept has been done many times before in one way or another. Even so the film is basically one level with little dramatic occurrences to keep you constantly tuned in. The cinematography is amazing and the score is quite appropriate but the direction not so much the writing could have been slightly better as well. Actually a few more supporting roles like friends of the family would have helped. Her brother in the film, Andre (Nyasha Hatendi) kind of comes and goes in a blink of an eye. I did like the new toys of the future, like the car and some of the games played in the house as well as some bare essentials but it is the family dog that takes the prize for its reaction to the new Cameron. The final twenty minutes of the film are its best and surreal especially for me since I have a very ill sister and recently, I was stripped of my opportunity to hold her, kiss her and talk about old times, tell her I love her and say my goodbye. It is a moment unlike Cameron that I will never get back and no one seemed to care or understand but me!

More in this category: « Nightmare Alley West Side Story »
back to top

We have 227 guests and no members online