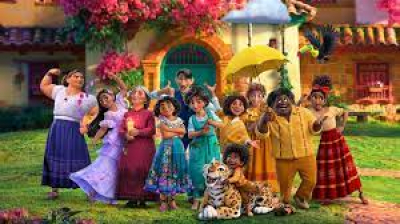 The story follows the Madrigal family in Columbia years later after they fled their original home, for if they stayed, they would be killed. Traveling through the mountains the Madrigals and their three infant children along with many others are in a race of life and death. Yet when the men on horses catch up to the families Abuela Alma’s (voice of Maria Cecilia Botero) husband is murdered while trying to save his family and others. What also happens is the candle that he held through the night has turned into a magical force, a burning candle that will not burn out.

Years later as the children grow and more are born, they all get blessed with a magical power living within the home known as Encanto, Luisa (voice of Jessica Darrow) becomes strong, Isabela (voice of Diane Guerrero) is forever surrounded by beauty and roses. Each young member is blessed with a power as they open their door within the family home during their celebration all except for Mirabel (voice of Stephanie Beatriz) she received nothing and her magical door disappeared. Mirabel was a bit of a misfit but always very helpful to her parents and siblings except for Isabela whom she thought was extremely spoiled and sheltered. Isabela even had the most handsome man in their village ask for her hand in marriage. Mirabel has struggled for many years wondering why she was never given a power heck even young Antonio (voice of Ravi Cabot-Conyers) received the gift of talking to animals. In her journey to discover the truth she meets up with Bruno (voice of John Leguizamo) and his many rats and like missing pieces of a puzzle she learns why the magical home in which they all live is suddenly cracking, the family is losing their powers and the candle is burning out for the first time ever. It is Mirabel that is faced with the truth along with her family and the villagers and it is she who can find the answers.

The story is enchanting so hats off to the directors and writers for bringing such a magical film to the big screen. Disney will once again have a hit on their hands let alone all the merchandise to follow in and out of their parks. The colors in the film are vibrant, beautiful and inviting to your senses. The wardrobe on the characters is wonderful as is the score behind the many adventurous journeys. The flowers, the animals and the landscapes all jump out at you to fill the big screen with every color imaginable. Of course, the music is spectacular and the voices superb but there are a few times that the music seemed faster than the words and I’m not sure why so that is the only issue I had. Overall, as the story continues the momentum of the film increases more from start to finish. Of course, the animals are depicted as pets and I mean the jungle creatures which is not a good message but hey it’s Disney and it’s a cartoon out to make the audience laugh, sing and enjoy all the colors and more ever made in a crayon box.

More in this category: « Clifford the Big Red Dog House of Gucci »
back to top