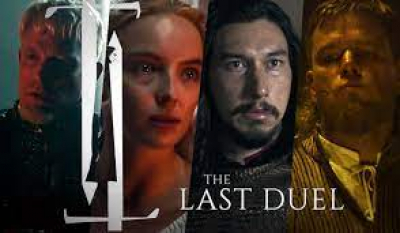 It is the year 1386 on a snowy day in December when Jean de Carrouges (Matt Damon) and Jacques LeGris (Adam Driver) are about to challenge each other in a duel to the death. Why? Well flash forward many years earlier in Normandy we find out through three different views from three different people that the reason for this duel is to honor the possible truth that Jean de Carrouges new wife Marguerite (Jodie Comer) says she speaks of to the courts. The question is though is that does she speak the truth that she was raped by a friend of her husbands or does the man being accused speak the truth?

Jean never seemed to have many moments in life go his way. His father died, his mother (Harriet Walter) moves in with him and Marguerite because the only thing left from their estate is the honor of their family name. Jean the Squire was best of friends with Jacques even though Count Pierre d’Alencon (Ben Affleck) favored Jacques much more than Jean. It seems everything that Jean fought for was taken away and several times given to Jacques and some think even Jean’s wife. Women in those days were treated more like property than a human being so their say in this moment in history did not stand for much but if challenged and found guilty by God in the words of King Charles VI (Alex Lawther) both Jean and Marguerite will die.

The film is very long and it basically doesn’t need to be but I have to admit I kind of liked the story retold three times by three different characters. The first time felt normal, the second chapter a bit déjà vu and by the third chapter I thought I was going a bit bonkers, like the movie Groundhog Day. It surely made the film different than most and each version had somewhat subtle differences but it is the last twenty minutes in the story that really shines. Nothing really exciting about the wardrobes but the score behind many scenes was quite appropriate. Great cinematography and I enjoyed the writing but felt that some of the direction could have played out with shorter scenes when retelling the story with minor differences three times.

Driver is quite exceptional in this film playing the knight adored by many especially women and of course Affleck’s character. I must say Affleck looked pretty good as a blonde and definitely has been shaping up in looks and acting. Maybe getting back with J Lo is doing him good. Comer was just striking with her looks and her acting abilities to hold a story line three times making the final moments of the story one to leave the audience in bewilderment. As for Damon I was a bit torn between liking his role and not I mean he does a great job but I found myself always seeing Matt and not so much Jean. There are many animals in this film from dogs, to chickens and horses and most are depicted well except for one scene specifically in the duel yet when Jean was trying to breed his one horse there is one moment that makes you think that the truth behind the rape was actually the female horse.

More in this category: « Shang-Chi and the Legend of the Ten Rings Halloween Kills »
back to top

We have 256 guests and no members online