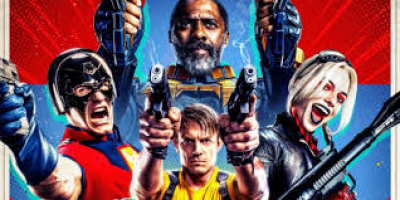 A secret U.S. government office run by Amanda Waller (Viola Davis) a tough boss as well as a tough woman in general that has no sympathy for anyone but herself. She enlists a group of super-villains from Belle Reve prison, Bloodsport (Idris Elba) the enlisted leader who joined the group to keep his daughter out of jail at 16, Peacemaker (John Cena) the hunky man with a so-called bed pan head, Ratcather (Daniela Melchior) loves rats just like her father did, Polka-Dot Man (David Dastmalchian) kills with polka-dots and hates his mother and King Shark (voice of Sylvester Stallone) always looking for more num num’s. Waller also enlists a group of idiots so to speak to join the Task Force X, Savant (Michael Rooker) the bird hater, Colonel Rick Flag (Joel Kinnaman) actually a smart guy with feelings for Harley Quinn (Margot Robbie) also on the team, T.D.K. (Nathan Fillion) the detacher, Captain Boomerang (Jai Courtney) of course he fights with boomerang’s, Javelin (Flula Borg) the man with the sexy voice, Mongal (Mayling Ng), Blackguard (Pete Davidson) brainless and Weasel (Sean Gunn) an actual weasel but big and ugly.

All the men and women and beasts are dropped off on an island named Corto Maltese. Yet when they hit the beach some live and some die but the survivors are out on behalf of this secret mission to destroy a secret alien weapon, Starfish, held up in a heavily guarded location on the island. As the crew along with some islanders that want to over-throw the government and enlist a democracy run by the people continue their mission the fight nor the journey turns out as expected as they all fight for the same cause. Or do they!

I enjoyed the film which is nicely directed and written. Grant it the language is a bit off limits for the younger demographic hence the R rating but the film is filled with action and a few plot twists throughout the story. Great special effects, wardrobe and an appropriate score make this story worth seeing but it definitely plays just slightly a bit too long. Although I did like that not all characters survive leaving the remaining characters more complex.

I must say all the actors do a great job with their characters but the stand outs especially due to amount of time on screen Robbie as always is kick ass and would make any man’s head turn, maybe all the way around but it would turn. Elba is fantastic and as always great to watch in almost any roles he plays and this one he proves once again he’s a leader. Cena is hysterically witty with a twist of egotistical and feminine attributes, Davis is surely one tough woman and she proves it here as she tries to get her way all the time, Melchior is the perfect animal lover even though her bestie is a rat. Overall a great cast, great effects and a wonderful group of supporting characters make this film worth seeing. I was a bit disappointed by the killing of birds in this story they truly took a harsh and bitter ending whereas the rats become the heroes.

More in this category: « Free Guy The Protege »
back to top