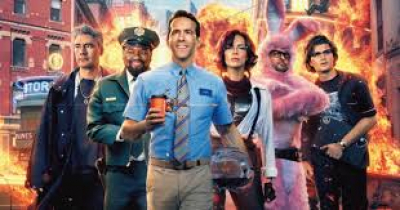 Do you ever feel like you’re just too ordinary or that life is just passing you by, doing the same routine over and over? Well, for bank teller Guy (Ryan Reynolds) life is just that, wake up, in a nice but super white very clean apartment, say hello to Goldie, your gold fish, get dressed walk to work, pick up your ideal cup of coffee, see your buddy, Buddy (Lil Rel Howery) at the bank and then pow, the bank gets robbed! Yet after a while Guy starts to change and when he spots the Molotov woman aka Millie (Jodie Comer) he no longer wants to be that back end, mister nobody, NPC player, eventually coming to terms that he can start to control this chaotic world and make it better.

The game that Guy is in was created Antoine (Taika Waititi) a major money mogul thanks to this incredible game filled with criminals, explosions, bad guys, car chases and just about everything that is out to kill and destroy anyone good. But, did Antoine really write this program or was it created by Millie and Keys (Joe Keery) and meant to be a more subdued and melodic environment for players around the world? As Millie tries to prove that Antoine is the bad guy her character begins to fall more in love with Guy who throughout his journey is beginning to come out as an AI, the first artificial intelligence character ever. So as the game becomes more about Guy then blowing things up Millie searches for proof to use against Antoine for stealing her and Keys creation.

I absolutely loved the film and it is so smartly written and directed that it will keep you captivated for 2 hours. Grant it the film reaches out to a younger audience since many people of my age (59) and older may get lost and not understand what is going on. Let’s face it the young generation was born with computers and in my day something as such was not even a thought. But if you pay attention to everything going on, the beginning will make more sense as the movie continues. The story has an amazing amount of action going on throughout the entire film. Some of the best effects from beginning to end accompanied by a great score and some amazing wardrobes, cars, creatures, and overall background stories to match.

Reynolds is once again America’s sweetheart, kind of like Chevrolet, hot dogs, ball games and apple pie all rolled into one person and he definitely doesn’t disappoint in this story. Comer, I am not familiar with as is most of the other cast members but her, Keery, Ambudkar, Waititi and Guy’s best friend played by Howery all are superb as are the supporting characters as well. The film is fresh, smart, fun and very intelligent with a few cool cameos throughout. So, sit back with a drink and popcorn and enjoy this great film ideal for the times we live in. Thankfully the gold fish lived as does the lost kitties so the film is animal thoughtful as well.

More in this category: « Jungle Cruise The Suicide Squad »
back to top