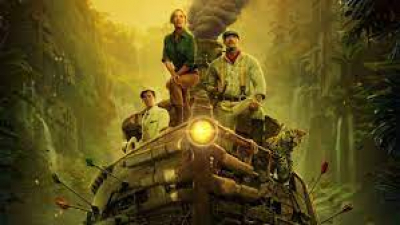 It is 1916, two years into The Great War and Frank Wolff (Dwayne Johnson) is giving river boat cruises to rich people as he is currently trying to pay off Nilo (Paul Giamatti) for an engine he bought from him. No one knows the jungle river quite as well as Frank so when Lily Houghton (Emily Blunt) and her brother MacGregor (Jack Whitehall) come along with a stolen arrow head to search for the tree under the Tear Moon, Frank accepts their offer. Well, the offer involved a big monetary payment of course and a secret of his own!

They could not get out of the harbor at launch since Prince Joachim (Jesse Plemons) and his henchmen are all out to get Lilly and her arrow head. It is said that once the tree is found where water becomes stone and it is a tear moon in the sky then with the help of the arrow head the tree will bloom with flowers that can cure any diseases known to man. Along the journey, Frank, Lilly, Macgregor and Frank’s pet leopard are confronted with demons of the past led by Aguirre (Edgar Ramirez) and his men from the 1500’s but also Prince Joachim and his group of bad guys. There are many adventures that await them all, the jungle full of all types of creatures like spiders, snakes, bugs, birds, monkey’s and more but it is the water at times that seems to bring out the biggest challenges as everyone involved all want the same thing.

There are quite a number of twists and turns some you may expect and others I grant you will not figure out until the end. I thought the director did a phenomenal job with this film with a back-drop so beautiful as only the Brazilian jungle can be. I really appreciated the writing dealing with off the wall jokes to the moments of life and death. This story will keep you entertained from start to finish with all the action but also all the wonders of the jungle as the main characters search for the tree. The score was superb and the costumes were quite fitting to the times. I must say that one of two things almost prevented me from the 4 out of 4 paws, the leopard as a pet since wild animals should never be pets and MacGregor for being a somewhat stereotyped homosexual man. Overall, besides those two items Blunt, Johnson and Whitehall and all the other exciting cast members, animals and action stunts bring this film into the go see film of the summer.

I have fallen for Emily Blunt over the years, her acting has just seemed to become better and better with age, also because I loved a number of her previous roles. Johnson is the typical he-man on screen that makes everyone fall in love with him especially the leading ladies. Plemons does a great job playing that mean bad guy with a slight touch of stupid. Giamatti does not have a huge role but as always is perfection. Whitehall the token gay man is brilliant playing a funny but when needed fierce character ready to stand his ground in the jungle even if he is wearing designer shoes. His coming out story is truly one for the books, so thanks Disney. All other supporting actors and extras help bring this story into pure entertainment, joy and a heck of a lot of fun. Besides bees I did not see any other animals harmed in this story oh and the snakes also and we can’t forget the piranhas too.

More in this category: « Old Free Guy »
back to top

We have 354 guests and no members online