In the Heights Featured 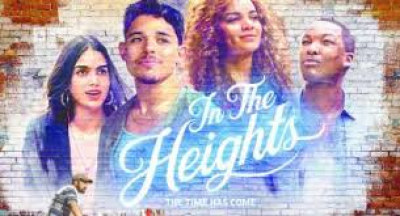 The very lovable, musical and story-teller Usnavi de la Vega (Anthony Ramos) owns a Bodega in Washington Heights with the help of a young man named Sonny (Gregory Diaz IV). Usnavi dreams of one day returning to the Dominica Republic to run his fathers (Marc Anthony) old business on the beach which according to businessman Pike Phillips (Patrick Page) happens to be a disaster. Sonny may be young but he has the voice, mind, personality and sexual drive of a much more seasoned man. Usnavi takes care of Abuela Claudia (Olga Merediz) an elderly Cuban Woman who loves Usnavi and the others as her own children. Cuca (Dascha Polanco) is a young woman with hopes of moving uptown and creating her own line of women’s clothing, a very talented beautiful young woman in a bit of a slump who has an affection for Usnavi while he like a young boy stumbles on his every word whenever she is near him. Benny (Corey Hawkins) is a close friend of Usnavi and works for Kevin Rosario (Jimmy Smits) whose business may be closing because of his daughter Nina (Leslie Grace) who returned home for two reasons some racist remarks and the lack of money to continue college but with her father wanting to sell his business for her it causes conflict but thankfully Nina has Benny to lean on.

In the Heights takes place a few days right before a well-known New York blackout that lasted for days. During the days before the blackout and during we learn the personalities of the major characters I mentioned above. Like who loves who, who is telling a lie, who won the lottery in the neighborhood and does Usnavi finally make a change in his surroundings. But we also get to learn about the supporting characters as well, Daniela (Daphne Rubin-Vega) the owner of a hair and nail salon along with her bestie’s Carla (Stephanie Beatriz) and Vanessa (Melissa Barrera) who bring a bit of laughter and excitement to the story. The Piragua guy (Lin-Manuel Miranda) in competition with Mister Softee (Chris Jackson) for the neighbor kids out for a cold dessert.

The film is brilliantly directed and the writing of the story is well done but I do have a bit of a conflict with the writers. Back in the day in Washington Heights was there no violence or major life crisis, the writers touch on some issues but it seemed that between personal conflicts and dance and music Washington Heights was pretty ok. The photography and effects in the film were astounding and the voices all superb when breaking into song yet throughout all of that the actors really shine through with their roles. Ramos is perfection as is Hawkins, Grace, Polanco and the man of levity, Diaz. The hats go off to Merediz that seems to be the soul of the other people that surround her. With a great cast including the supporting roles and all the singers and dancers who help bring entertainment into a full out musical I say well done.

The discrepancies I personally found with the film was when the film spoke in Spanish and did not use subtitles the director and writers lose a bit of an audience that may want to see this story but at times a joke or something may go right over their heads. The music of which there is plenty I found to go well with the dancing scenes but I did not find my foot tapping on the theater floor like it may have for other musical films. I guess it could have been a language barrier! Bottom line the film is very good not perfect but enjoyable especially for the Hispanic community. It’s about time though that a film has hit the big screen with a cultural Latin bounce. Sit back and enjoy the ride since this story will take you on a long journey of music, dance, and the Hispanic culture. In life sometimes we learn that there truly is no place like home.

More in this category: « The Conjuring: The Devil Made Me Do It Hitman's Wife's Bodyguard »
back to top

We have 249 guests and no members online