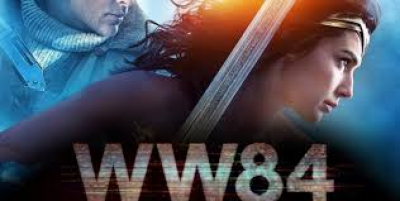 As the film opens, we learn from a young Diana (Lilly Aspell) that cheaters never win in the long run so the act of patience and experience are always your best option. Forward to 1984 where Diana Prince (Gal Gadot) is working in the geology offices of the government in Washington DC. A new woman has joined the office by the name of Barbara Minerva (Kristen Wiig) a bit homely, nerdish with a lot to say. Barbara was hired and asked to look at several archeological items brought to her attention leaving Diana a bit curious herself. One item in particular, a type of crystal structure with words engraved is known to grant wishes, at least that’s the theory.

Well, the theory happens to be accurate and after Diana wished to have her boyfriend back, enter Steve Trevor (Chris Pine) he as is Diana are beside themselves that they once again are able to hold each other close. The 80’s though for Steve does take some getting used to, especially the styles of clothing and the technology which leaves him breathless. Maxwell Lord (Pedro Pascal) happens to visit Barbara’s office for a tour since he is becoming a huge donor to their cause but Max Lord has other motives then a donation. As for Barbara she has developed a liking for Max and while holding the crystal wishes she was more like Diana, beautiful, sexy, strong, and well just a ten so to speak. Soon thereafter Barbara begins to change, a change that she is liking very much, better looking, sexier clothes and a shot at Max.

Max Lord though has other ideas and they all evolve around getting his hands on that crystal. What better way to show his young son Alistair (Lucian Perez) that daddy is envied by all in every country on this planet. Meanwhile Barbara is continuing to change and not all for the best, actually one should be careful what they wish for because in the end it may not be all it’s made out to be. As for Diana she and Steve are out to save the world from the greediness of Max Lord and the overzealous Cheetah woman. In the end, life sometimes should be left alone as is and one should always be careful for what they wish for.

The director, Jenkins, did a great job but you have to remember that this story is very different than the first Wonder Woman. I enjoyed the writing especially as they toyed with the aspects of life in the 80’s although I would have liked to have seen a bit more levity and awesome music since that was the foundation of that decade, along with the fashions. The film is two and a half hours but it is always attention grabbing from start to finish. Along with some wonderful cinematography and action moments the story is never dull, a bit hokey at times but never dull. Wonder woman uses her lasso a lot, we experience the invisible plane and several new traits that Wonder Woman has developed throughout the years.

Gadot is perfection in this role from her acting skills, to her beauty she is a smart and wonderfully cast actress to play this role. Pine is funny or at least at times tries to be but his love for Diana and his strength to help her shines through. Big surprise Is Wiig, wow she really took on this role with strength and courage, conquering every move and every emotion. Pascal plays the role well but at times maybe a bit to theatric. A great cast of supporting roles and extra’s along with some beautiful photography and this film although very different than the first is a winner once again for Wonder Woman.

More in this category: « The Croods: A New Age
back to top

We have 456 guests and no members online