The Croods: A New Age Featured 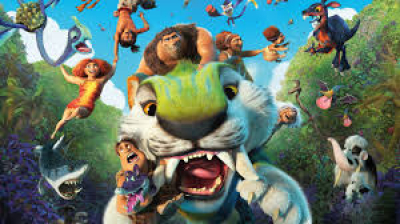 The prehistoric family, the Croods, father Grug (voice of Nicolas Cage), Ugga (voice of Catherine Keener), Eep (voice of Emma Stone), Guy (voice of Ryan Reynolds), Gran (voice of Cloris Leachman), Thunk (voice of Clark Duke) and Sandy (voice of Kailey Crawford) have set out on an adventure to find a better home. Along their journey they found the Bettermans, Hope (voice of Leslie Mann), Phil (vice of Peter Dinklage) and Dawn (voice of Kelly Marie Tran). Life with the Bettermans is definitely a step up towards being a civilized family, your own room, lots of food and fresh running water but there is one rule Phil enforces and that is to never eat the bananas.

It seems there’s a bit of a mystery behind the banana rule and Grug aims to find out along with trying to separate Guy from Eep since they have fallen in love and Grug fears Guy will take Eep away to start their own life. Meanwhile Phil wants Guy to stay without the Croods family to forge a relationship with Dawn who Eep thought at first was a man, only because of the name! Albeit the girls got along fine since both have a new girlfriend in their lives to do things with, like get in trouble. Yet overall, the Bettermans thought they were better and so did the Croods for a while but in the end both families came to an agreed realization about life, that is with the help of the crazy monkeys and the secret behind the bananas.

This is a fun and very colorful animated sequel nicely directed and written for all ages. The message in the film is well portrayed and the soundtrack is awesome, it had me singing along. Well, who didn’t like “The Partridge Family” from a very distant past in my life time and maybe yours although the younger generation will think its just a catchy new song, “I think I love you”? The animation is truly on point and the voices are perfect but it is the young love that steals the show along with Gran that is. It felt great to go see a movie in the theater, hard to believe it’s been almost a year. Either way if in the theater or home you will thoroughly enjoy this film, “The Croods: A New Age”.

More in this category: « News of the World Wonder Woman 1984 »
back to top

We have 706 guests and no members online