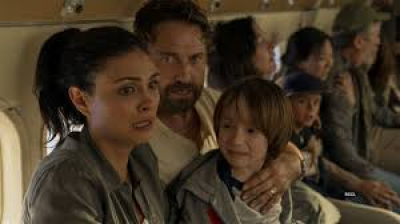 John Garrity (Gerard Butler) is a successful structural engineer in Atlanta, Georgia but at home with his wife Allison (Morena Baccarin) and their son Nathan (Roger Dale Floyd) life is not as structured. It seems that their marriage is tarnished and you will find out why towards the middle of the story. On the news, stories of a comet approaching earth is on every channel but according to the reports it will not affect the human population. Yet when the meteor is about to hit John gets a text on his phone that he and his family are to report to an air base to be flown to underground shelters. Well right about now all hell breaks loose, it seems that there are more meteors many small but one huge that will destroy all of mankind.

You would think that the Garrity’s family trip to safety would be easy but not so. Leaving behind friends and family never comes easy when you are not allowed to bring anyone else but the names given in the message. There is one major problem though when they arrive to check in an issue leaves them grounded and separated. As a viewer we watch as Allison and Nathan do their best to find John as John tries to find them but neither of their journeys go well since the true nature of some people in fear shines through with unapologetic outcomes. Yet when they eventually come together the task of survival is still a struggle but not unreachable, they hope!

I really enjoyed this film but during my online screening session the film kept pausing for some reason. Maybe a comet was obstructing the connection since Tampa Florida was the first major city destroyed! Anyway, I still enjoyed the film which kept me in anticipation of what would happen next. The director does a good job but it is the writers that keep things moving since dialogue was pretty strong in this film. I thought the special effects were mediocre at best so the writing is what keeps you more involved. A lot of the devastation was seen through a television news channel. I mean there is carnage, fires, running for your life moments and all but I guess I was looking for a bit more. I guess the writers were trying to keep it a bit more real actually the plot was very similar to the movie “Impact”. The main characters which are the Garrity family, the father played by Butler does a great job on holding your attention but I personally am a fan of his already. Baccarin playing the mother out to protect her son at all costs comes across believable and Floyd also hangs on as the diabetic son. A nice small supporting role by Scott Glenn who plays Allison’s father along with several other supporting characters and a huge number of extras helps to breathe more life into the story even though many moments are a bit far-fetched.

More in this category: « All My Life News of the World »
back to top

We have 683 guests and no members online