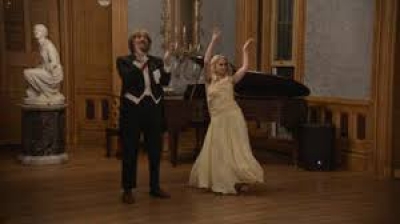 A follow up to the 2006 film, Borat Sagdiyev (Sacha Baron Cohen), is once again on the loose in America as a fictional Kazakh television journalist. Released from prison on a journey to redeem himself and his country by giving Johnny (a monkey) to America as a gift but when the crate arrives inside is a surprise, Borat’s unwed 15-year-old daughter Tutar (Maria Bakalova). Borat knows he must hide his identity because too many people in America may recognize him so he chooses a number of different looks. Knowing if he fails his mission he will be killed when he returns home he replaces the dead monkey with the gift of his daughter.

Borat’s journey is long and hard, every pun intended, as he encounters many Americans living and working in their daily lives as he sets out to make his ugly daughter into a beautiful woman. He succeeds the makeover of Tutar but still fails in giving her as a gift. It doesn’t take long before Tutar discovers her father is lying to her about so many things that she decides to go out on her own and becomes a journalist herself. At such time she meets her father’s target the man of which she is suppose to be a gift to, someone high up in the Republican party. Yet when they eventually both return to Kazakhstan they face their final curtain call only to discover the truth of their American mission.

What can I say other than brief nudity, bad language, stupid people, famous cameos, insults all around especially to one certain political group and some very disturbing looks at the American public. Real people and real events take place throughout this entire film and I can’t believe they got away with showing a number of offensive and disturbing moments not only involving the average joe but also people in high places. I laughed out load several times especially at the debutant dance and my mouth was on the floor during a certain hotel scene. The original wins out over this one but you will definitely find yourself applauding and laughing out loud yet for some I expect they will be very angry due to the content in this story. Nicely directed and well written Cohen once again fulfills his jock strap fourteen years later. The real gem here though is Bakalova who I believe we will be seeing a lot more of in films to come. Remember to make sure you get out there and vote.

More in this category: « Evil Eye The Last Vermeer »
back to top