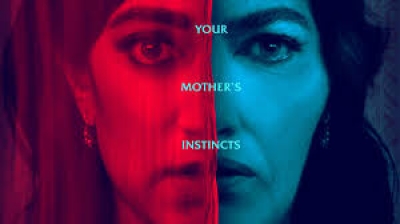 Thirty years earlier in Delhi a young pregnant woman is attacked by a known stalker while crossing a bridge on her way home. In present time, Usha (Sarita Choudhury) in living back in Delhi with her husband but her daughter Pallavi (Sunita Mani) stayed in New Orleans, Louisiana with a dream of making it on her own in America. Her mother though had constant worries about Pallavi being alone and that she would never meet a man, get married and live a happy life in America.

Yet when her mother tries to set her up on an internet date the strangest thing happens. While sitting in a local coffee shop Pallavi did not meet her blind date who happened to be very late but rather she meets a handsome young man named Sandeep (Omar Maskati). As their life starts to move a bit on the fast track Usha starts to have headaches and flashes back to her stalker when she was young. Pictures sent by Pallavi, a sixth sense and a private investigator later Usha begins to realize how close Sandeep’s personality, traits and background were similar to the man that died 30 years ago that night on the bridge when he attacked her.

Living on her own, introducing Sandeep to all her friends and eventually getting engaged Pallavi believes she has found happiness even though her mother thinks otherwise. Usha is acting a bit crazy thinking that Sandeep somehow is her stalker from 30 years back. Could it be a coincidence or could Usha’s prayers and belief in the “Evil Eye” be telling her something. After some conversations with Sandeep Usha is even more certain he is not what Pallavi thinks he is but more of what evil could be reborn with a vengeance either way the truth eventually comes out in the end.1

I really enjoyed this film. At first, I wasn’t sure but the story really begins to draw you in with several twists and turns. With a mostly Indian cast all of the actors have superb performances. There is one scene that I wish was written differently since it felt a bit odd acted by Maskati. I thought that when the plot was revealed it may have come across with a bit more of a shock to the viewer. Other than that, though the direction is great, the writing is well done, the photography superb and all main actors Choudhury, Mani and Maskati will definitely keep you interested for most of the length of this story. The end of the film was and is always a thought in my mind that after death your spirit never truly dies. I guess time will tell!

More in this category: « Black Box Borat Subsequent MovieFilm »
back to top

We have 701 guests and no members online