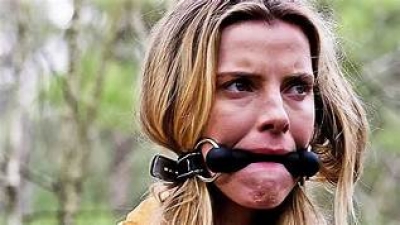 Movie review by Jon Patch with 1.5 out of 4 paws

Twelve, possibly eleven, since one man had an incident on the plane, deplorables wake up in a field together with nothing else but a big wooden box. War is war and each of these men and women wake up with a type of dog collar on their mouth. Yet in the box is definitely something they can use for battle besides Orwell that is! This in known to some in society as Manorgate and Athena (Hilary Swank) is the gate keeper so to speak. In the field Crystal (Betty Gilpin), Staten Island (Ike Barinholtz), Shut Up (Ethan Suplee), Yoga Pants (Emma Roberts), Target (Christopher Berry), Vanilla Nice (Sturgill Simpson), Big Red (Kate Nowlin) and some others are on the run in what they believe is the state of Arkansas trying not to be killed by the hunters like Ma (Amy Madigan), Pop (Reed Birney), Richard (Glenn Howerton), The Doctor (Steve Coulter) and Martin (Dean J. West) to name a few.

Right from the start body parts are flying as the prey try to defend themselves against the unseen. Nothing in this part of the woods filled with traps appears as it is that is until the prey soon becomes the predators and the reversed game is on right down to cat fight within the manor.

The film has a political under-tone but without enough character development or basis for what the heck is going on and why. The writers have left so many holes in the story that the director has to fill them up with brutal murders. In the beginning the movie starts off with somewhat of a group of bad actors dealing with an early wake up so to speak. But when the people wake up in a field not knowing anything, the same as the audience does, you think this film is going to be really good well drop the really as it gets going to just good and then in the middle of the film I fought to stay awake and unconfused by the lack of character development. Later towards the end the action picks up a bit with what they try to call twists and bad turns but I’m still not a fan. The fight within the castle almost reminded me of Crystal and Alexis fighting over Blake in the old “Dynasty” tv show. It may not be the worse horror film I’ve seen but it truly does run within that group. Thankfully for Gilpin she at least brought her acting abilities to her role as did Swank but she has a very small role. As for Orwell I think a call from PETA may be appropriate. So bad that pig was one of the better actors in this film.

More in this category: « I Still Believe Black Box »
back to top