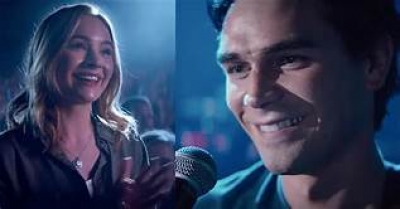 Lionsgate and Kevin Downes Productions present a PG, 115 minute, Romance, Music, Drama film, based on a true story and directed and written by Andrew Erwin and Jon Erwin with a theater release date of March 13, 2020.

September 1, 1999, a young Jeremy Camp (K.J. Apa) is leaving his parents (Gary Sinise & Shania Twain) and two younger brothers in Lafayette, Indiana for college in California. One gift from his family is a guitar because for his father music was a hobby but for Jeremy it is a gift. One of Jeremy’s favorite singers is Josh Luke (Nathan Parsons) and when he arrives on campus he goes out of his way to meet his mentor before a live local concert of The KRY. It is at this same concert that he notices a beautiful girl, Melissa Henning (Britt Robertson) in the audience and he knew at that moment he had to meet her.

As boy meets girl and eventually almost loses girl because of another guy the triangle gets even more complicated. Secrets, hurt feeling, romance, and meeting that one star in an infinite galaxy is something that Jeremy never thought would happen but he knew he was in love. Secrets always tend to surface and people sometimes get hurt but in a time of crisis true friendships have a way of making things right. In this case Melissa is in the hospital and has received the news that she has stage 3 cancer and from this moment on Jeremy along with her family was always there and through the power of prayer, God and love Melissa became cancer free or so she thought. Someone would only be so lucky to find a person that would be by their side when time could be short, would love them enough to marry them and always be there through sickness and health.

Some say the death of a single star out shines everything in a galaxy. There is no more pain and no more suffering and saying goodbye may actually be until we see each other again. Life and prayer may not have all the answers I guess it’s depending on what you believe in but when just by paying attention to the signs around you and the meaning of your voice that can help just one other person in need than you may just find the answers you seek. Years later, Jeremy paid attention to the signs and changed that one life by telling Melissa’s story which is some strange way opened his heart to another journey while still holding the love he will always have for Melissa.

Timing in life is everything and there are reasons for everything I think. I saw the film tonight and had my best friend in mind who is in New Jersey by his mother’s side, she is dying of cancer a disease that took over her entire body so quickly and I wish my friend and his family nothing but love. I personally seek for my beliefs in God and prayer something I fight to understand especially since as a child my faith was ripped out of my soul and for a life time I’ve been trying to understand why. We can always ask why, like my friend for his mother, my fight for life and survival several times throughout my years or Jeremy for Melissa but I guess sometimes we will not find all the answers or will we? I loved this film, I laughed, I definitely cried and I felt my mind thinking so heavily about life, love, my family but most of all every time why? I highly recommend this film to everyone it is a story that is relevant to everyone maybe not now but in time it will be for all. Great music, great scenery and a wonderful cast make this film exceptional. Robertson and Apa are the ideal couple, believable and worth cheering for. So bring your box of tissues and be prepared to believe.