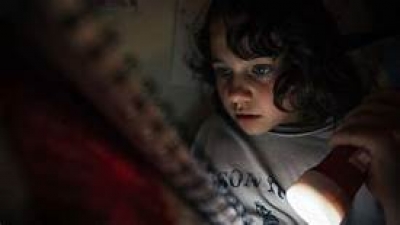 Movie review written by Jon Patch with 1.5 out 4 paws

Fox Searchlight Pictures, The Department of Motion Pictures and Court 13 Pictures present a PG-13, 112 minute, Fantasy, Drama, directed by Benh Zeitlin and written by Zeitlin and Eliza Zeitlin with a theater release date of February 28, 2020.

Living above an old diner run by their mother, Wendy (Devin France) and her two twin brothers Douglas (Gage Naquin) and James (Gavin Naquin) one night jump from their windows on to a moving train because of a young boy, Peter (Yashua Mack), that lured them into a new adventure. Afraid of growing old and being a broom and mop boy for their mother’s diner Doug and James were more than happy to seek a new adventure in their young lives. From train to a small boat the four children meet another young girl and sail out into the ocean on a journey to a volcanic island. This is where they meet other children along with a missing boy from their neighborhood, Thomas (Krzysztof Meyn) who is living life with the other children on this island under the direction of Peter.

Yet on this island of young children Wendy sees an elderly man, Buzzo, who apparently was once young but stopped believing so he turned old. He and others live on the other side of the island but have never stopped trying to become young again. They believe that a creature in the depths of the water known as ‘Mother’ will help them regain their youth but at what consequence! The young have rules to follow and if they don’t follow what those rules are they may grow old or disappear. The worst you can do is stop believing because one day you could be Buzzo and the next a grain of sand. After a number of journeys a war breaks out between the young and old with the main target being Mother. Yet when both groups realize their true selves Peter is forever young and the Hook is revealed and both have become a bedtime story for all the generations to come.

The film has some beautiful cinematography but to me it is a bit oddly confusing at times. It follows the story of Peter Pan but with a more human somewhat realistic but somewhat not realistic approach if that makes any sense. Yet then again the movie itself is slightly bizarre. I get it as long as we continue to believe we will be forever young even if our bodies continue to grow old. I can’t say I loved this film but I did not hate it either. We all grow old to some extent and as long as we keep a youthful mind we will live our adventures in life and pass those adventures on to our children. The one lesson to learn though is to always love your mother and keep your mind young even if you look in the mirror and staring back at you is some old person. Hats off to the casting of this film since all of the children, virtual unknowns, did an exceptional job with their roles with Mack and France living in the world of perfection. I love films with young characters I guess it helps to keep my youth I just found that this one misses the mark slightly. There are sea creatures and birds in the film but the addition of even more animals would have been helpful.

More in this category: « The Way Back I Still Believe »
back to top