The Way Back Featured 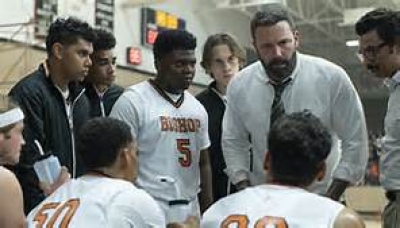 Jack Cunningham (Ben Affleck) is a middle-aged man working in construction that has lost his way in life. Once married to Angela (Janina Gavankar) now separated the couple had gone through some terrible heart-ache that eventually led them to break apart. Jack is living in a rundown apartment and angry at the world but still in contact from time to time with his mother, his sister and her family. Most of his leisure time is spent drinking at a local neighborhood bar. In his youth he was quite the basketball player who led his team at Bishop Hayes High School to many victories. Actually Jack could have written his own ticket to any college of his choice he was that good but for personal reasons he chose to walk away from the sport and all its opportunities.

One day Jack receives a call from the priest at his old high school asking him if he would fill in as coach of their basketball team. With no wins to speak of and no true direction on how to win a game the team was lost until Jack with the help of Assistant Coach Dan (Al Madrigal) took the team by the balls and coached them to wins on the court. Jack seemed to have found something that helped keep in away from the bottle but not his bad language since against the school code he cursed a lot. Soon the team started to respond to their new coach but not without some trial and tribulations along the way. They began to win and thanks to their team captain Brandon (Brandon Wilson) all the players, Chubbs (Charles Lott Jr.), Kenny (Will Ropp), Marcus (Melvin Gregg) and the rest of the boys came together as one. Jack realized once and for all after seeking the help he needed that you can’t change the past but you can choose how to move forward. In the end the only way you can be a winner is to fight for what’s right no matter what life throws your way.

The movie is well written and directed but at times a bit slow and dark in terms of dialogue. I would have enjoyed it more if we learned more of the kids rather than for the most part only about Jack. You can see that Affleck poured himself into this role that in ways have reflected some of his own real life maybe! But the opportunities were definitely there to add some levity and humor into some otherwise depressing moments. I get it that this is a story of hitting bottom and working your way back into recovery and the topic is probably true to so many people living the day to day life in the real world but a bit more light and a little less darkness would have made this story more inspiring. Overall it’s a good film and Affleck is the true focus and he carries it well but Gavankar, the school, church and the team seem to take a backseat the whole way and I guess I would have liked to see them drive a bit more than they did. It has a nice score and some goldfish in it but a bit more character development on the supporting cast would have gone a long way.

One thing that drives me mad, especially when I’m trying to watch and review a film is when people behind me translate the film the entire two hours to each other. I wanted to shine my phone light on them and scream to the top of my lungs – get out!

More in this category: « The Invisible Man Wendy »
back to top

We have 347 guests and no members online