The Call of the Wild Featured 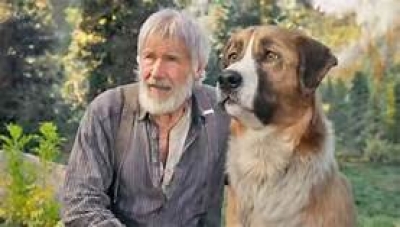 The Call of the Wild

Buck (played by Terry Notary) is a large breed dog known at Judge Miller’s (Bradley Whitford) family home for getting into trouble but that never stopped the Miller family from loving him. Meanwhile the gold rush is in full swing and men and women are traveling from parts of the country to Alaska in search of gold but what they need in order to travel from points A to B are sled dogs. Sadly one night Buck is dognapped and sold to become a sled dog but living in the warm climate and being taken to the icy cold everything in the environment was new to him as were all the people some kind but some not.

When entering into Alaska Buck had the pleasure of bumping into John Thornton (Harrison Ford) but at this time he was sold to a group of dogs owned by a musher (Omar Sy) and his companion (Cara Gee) that were mail carriers throughout Alaska. It takes Buck some time to fit in and to fall in line as a sled dog but lucky for Buck he had a spirit wolf to guide his journey. No matter when in time people are always released from their jobs and as for a mail carrier when the telegraph came into play jobs become obsolete and so were some dogs. Yet it did not take long for Buck and his team to be bought painfully by a greedy man that thought of nothing but finding gold.

Thankfully when a journey goes wrong John is there to save Buck who in turn saves John as they both take on a new journey with each other. Both enjoyed the company of each other while Buck finds his forever home and John meets his son once again.

I absolutely enjoyed this story which is directed and written well. I did find the cinematography breath taking and the score complimentary to the visuals. Notary does a great job playing a dog from its movements to its mannerism but at times a bit too human-like although that kind of is what made the dog relatable. Obviously you will realize the dog is not real and the same goes for the other animals but either way the movements and actions of the animals in this film are intriguing, comical and absolutely fascinating to say the least. Even though the story is well told I felt like a few more peaks would have helped the fact that there are just a few to many valleys’ from start to finish. Ford in my mind can do no wrong and once again he does not disappoint as the narrator and actor. Sy who I am not familiar with also does a nice job with his role and Gee is not a big part of what goes on but she does add some great supporting drama to her scenes. Whitford and others have small supporting roles but they all add in making this film enjoyable and worth seeing on the big screen. There are many animals of all kinds portrayed in this film but none being in any danger mostly because they were not all real.

More in this category: « The Rhythm Section The Invisible Man »
back to top

We have 720 guests and no members online