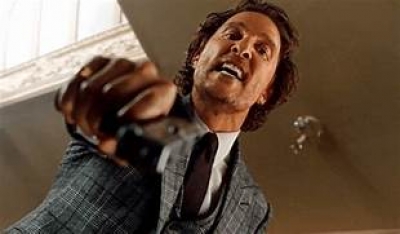 The story centers mainly around three characters Mickey Pearson (Matthew McConaughey) the lord of marijuana in the UK, Ray (Charlie Hunnam) Mickey’s right hand man and Fletcher (Hugh Grant) the man out to make a buck off any one he can but mainly in this case off Mickey for blackmailing him. So Mickey is married to Rosalind (Michelle Dockery) who happens to run a garage business for the rich and famous. Fletcher is the story teller that fills us the audience in on what is going on from the beginning to the end although before the story is truly over it could have some changes! Fletcher makes a visit to Ray’s home where he begins to fill him in on everything he knows about his business and secrets with pictures to prove his points.

Mickey has twelve hidden locations where he does his business which may not be as lucrative as some other drugs out there but at least his drug doesn’t kill people, so to speak! Even though he has a thriving business that some think could get hurt if marijuana becomes legal Mickey is trying to sell so as to retire with his wife but the highest bidder Matthew (Jeremy Strong) may not be willing to spend $400 million for it. Mickey has the locations, the staff and the technology but Matthew knows the growth of the product is 50% only so he wants all Mickey’s contacts as well or in his mind the asking price is not worth it. Yet sometimes when the lion is hungry he needs to eat! Or does he? With a vast majority of players Coach (Colin Farrell) and his young trainee’s, Dry Eye (Henry Golding), Lord George (Tom Wu), Big Dave (Eddie Marsan), Phuc (Jason Wong) along with several others including the Russians in this game of twists and turns you can’t blink for a second to find out who has the upper hand on the price for real estate. In this game of good deeds go unpunished and the fact that some people are never the predator but always the prey, even a real pig is not safe, doubt will always cause chaos.

You have to see this film but certainly pay attention because it is so smartly written and directed if you turn away for a second you could get lost and this story is way too good to not understand. It is heavy on story and light on action but many of the scenes and dialogue are just phenomenal. There are moments of marble mouth making some lines uneasy to hear especially when the audience is laughing so hard but still this film plays like a prayer. The cinematography is spectacular and the music spot on but the superb cast lead by McConaughey, Grant and Hunnam is the best I’ve seen in some time. Dockery plays the tough wife with a bit of maiden in distress and Strong also a maiden in distress so to speak. Farrell is always great and does not disappoint. Golding usually the nice guy is not so nice in this role. Marsan and his side kick Mr. Pig are wonderful together Wong brings a bit of doubt to his character but in a good way. Bottom line this film to me is a fraction from 4 paws but I still liked it so much the hell with the fraction and I gave it 4. It is the true form of Guy Ritchie but albeit his best yet.

More in this category: « Bad Boys for Life The Rhythm Section »
back to top