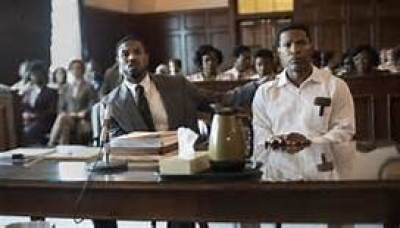 Based on a true story, Bryan Stevenson (Michael B. Jordan) is a young black man studying law at Harvard. He is in an intern program when he was visiting inmates on death row in hopes of one day practicing law to help people and mainly the inmates wrongly accused of crimes and sentenced to death. A few years later upon his graduation he decided to move to Alabama and try to help people on death row in hopes of getting another court date for another trial. It seems any lawyers in the past did not perform their duties when the money ran out or if the white community became too threatening for representing a black person in prison.

Well this is exactly what Bryan did when he and his new hire Eva Ansley (Brie Larson) started the Equal Justice Initiative and their first client was Walter ‘Johnnie D’ McMillian (Jamie Foxx) who was on death row for the murder of a white 18 year girl who worked at a local dry cleaning business. There was truth to be found somewhere in a town of liars that involved the local sheriff, lawyers, inmates and other members of the black community afraid to speak up in fear of what could happen to them as well. Walter’s cell in prison was between Anthony Ray Hinton (O’Shea Jackson Jr.) and Herbert Richardson (Rob Morgan) both sentenced to death and waiting to receive their letter of an actual death date. There was one dramatic and frightful scene where one of the men was electrocuted for a crime he committed while suffering from war PTSD.

When Walter is granted another court case due to some new found evidence by Bryan which involved Ralph Myers (Tim Blake Nelson) another inmate in the prison system, signs of prejudice and racism came flowing to the top for all to see but in a town run by racism did it make a difference? With further push for justice in a town filled with injustice Bryan finally found the State Supreme Court was hopefully the light through the trees that would bring Johnnie D home to his wife and children instead of convicted again on death row for a crime he never committed.

This film was a great story to be told and thankfully it was told from all sides of a community which involved a look at white people that stood up for what was right versus white people that condemned an innocent man because of the color of his skin. Nicely directed and overall written except for the fact that midway in the story it got a bit long this was a film that exposed those of bigotry but also showed the good in others out for justice surrounded by hate. I could not believe that a policeman would ask a lawyer into a room for a strip search and demand he remove all of his clothes. Why would something like that happen and he would still have a job? I hated to see how some of the white community acted in this film but was proud to see the white community that stood with the black community for truth and justice.

You could feel the conviction by Jordan for this role he played knowing that it meant the world to him for representing a black male role model standing up for the truth and saving men from death who are wrongfully accused of crimes whether black or white. Larson although plays a supporting role she is once again awesome and I truly appreciated her standing up for what was right. Foxx who I am a fan of does a great job as the man on death row but hats off to two other inmate characters that are superb both Morgan and Nelson. Even though I did find this film to be about 20 minutes too long it was still a brilliant endeavor by all the actors that stood for “Just Mercy”.

More in this category: « Like a Boss Dolittle »
back to top