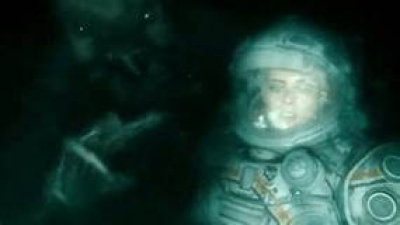 Out in the Pacific Ocean within the Marianna Trench there have been stories of bizarre happenings underwater. A crew of 316 engineers and researchers at the Keplar station over six miles below the surface of the water are suddenly faced with the ocean water crashing inside their facility. A small group of people, Norah (Kristen Stewart), (T.J. Miller), Emily (Jessica Henwick), Captain (Vincent Cassel), (John Gallagher Jr.), (Mamoudou Athie) are trapped within the station and must find a way out by walking to another station unknowing exactly why their stations were destroyed. Finding a way to safety becomes much more complicated when they discover what caused the destruction which continues even more so to threaten their lives as they struggle for survival on the ocean floor.

The film is a knock off of many other horror films like “Aliens”, “Life” or for that matter “Jurassic Park” where a group of people encounter the unknown and must fight for their lives in any way possible hence location differences like land, sea or air. It is probably one of the shorter monster type films I’ve screened but it definitely kept my attention for the short time while filled with dramatic scores and sudden quick moments. Being a horror fan I like all films like this and although this one was good I personally would have changed one of the creatures in particular. It became difficult to hear some speaking while in their underwater suits as well as somewhat distorted visually during the climatic ending. So there are many cliché moments but at times the film has some originality although not much. A good score with some cool special effects and a decent story the director helps make this worthy to watch for the diehard monster fans. Although a small cast Stewart does a nice job of carrying the weight with Henwick and Cassel coming in behind her. Miller brings a bit of levity but Athie and Gallagher Jr. are more supporters to the action than major players. Although the ending holds a no return for most I do believe the possibilities of a sequel is in the cards. Besides humans no animals other than creatures were harmed in this story.

More in this category: « Little Women Like a Boss »
back to top

We have 230 guests and no members online