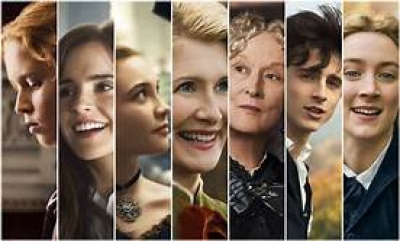 Columbia Pictures, New Regency Pictures and Pascal Pictures present a PG, Drama, Romance film directed and written by Greta Gerwig and novel by Louisa May Alcott with a theater release date of December 25, 2019.

The story of four March sisters, Jo (Saoirse Ronan) the writer, Meg (Emma Watson) the actor but more so wishes to be married with children, Amy (Florence Pugh) the painter and Beth (Eliza Scanlen) the pianist, all living in Concord, Massachusetts during the Civil War of the late 1800’s. All four sisters are very talented with each of their skills but they still live a modest life with Marmee March (Laura Dern) their mother and house keeper Hannah (Jayne Houdyshell), their father (Bob Odenkirk) is serving in the war. Across the way lives the Laurence family, Grandfather (Chris Cooper) and Theodore ‘Laurie’ Laurence (Timothee Chalamet), a very wealthy family who are friends to the March family. Actually Laurie is quite smitten with Jo and has thoughts of one day marrying her.

The girls were all raised by a mother who believed in helping the less fortunate then themselves which they did quite often and life sometimes had a way of giving back to them. Life in the March household with four sisters was never easy but overall they did love each other and that was the case years later when the girls became women. Aunt March (Meryl Streep) was very wealthy as a single woman but she believed that the girls should marry for money over love. As the girls got older they followed their dreams, Jo went to NYC to write and teach while in the meantime met Friedrich Bhaer (Louis Garrel) a professor. Meg married John Brooke (James Norton) and they had two children and Amy continued her painting while seeing a very wealthy young man. As for Laurie he was always in love with Jo but sometimes things don’t evolve like one would like. As for Beth she suffered Scarlet Fever in her younger years but her true love was the piano. Tragedy tends to bring a family together but sometimes it mends old wounds yet sometimes it doesn’t as for the March girls as always they dealt with it as best they could but always came together in the end. In the end on the selling of her novel Jo decided to do what was best for her let alone the Plumfield Academy.

There are so many sub-stories within this story that the film never gets boring in fact it becomes much more interesting and a film perfect for the holidays. It has great direction and writing and even though it’s been told in so many ways before this story I believe is truly worth enjoying. The score, the costumes and the cinematography are all perfect in so many ways as is the acting. Ronan, Watson, Pugh and Scanlen are superb together but if I have to pick the best of the four it is hands down Ronan. Chalamet is wonderful as a friend to the family but so much more in so many ways. Norton, Dern, Odenkirk, Garrel, Cooper, Houdyshell and Streep are perfection supporting actors that keep the story moving and always intriguing. Aunt March has one scene with a poodle which is quite the moment. Carriage horses abound as was the travel of the times. This is a wonderful film and friendly for the entire family.

More in this category: « The Song of Names Underwater »
back to top

We have 515 guests and no members online