The Song of Names Featured 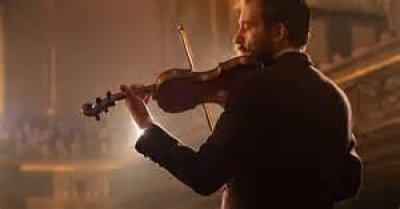 In a time during the war when the Germans were invading several countries a Polish father has brought his young son Dovidl (Luke Doyle) to live in London with Martin (Misha Handley) and his parents whose father would continue Dovidl violin training and make him a legend. At first Martin did not take well to Dovidl who took his parents attention away from him but he learned to accept him as his brother.

At the age of 21 in the year of 1951 and living in London with the same family Dovidl (Jonah Hauer-King) a Polish immigrant was about to perform his first international stage concert but when time began to pass the beginning of the planned concert Dovidl was not to be found. A matter of fact 35 years later Martin (Tim Roth) was on a continued quest to find out what had happened to Dovidl that he stood his father up at a concert filled with rich society people and important dignitaries. This concert caused Martin and his family to lose practically everything they had in life.

Martin with the help of Helen (Catherine McCormack) tried to think of any possibilities of what could have happened to Dovidl that day. Maybe he returned to his homeland to be with his parents and siblings or maybe they were killed in war. Maybe he died back then and no one identified his body, the scenarios were running rampant but when Martin noticed a young violinist named Peter (Max Macmillan) perform the same gestures before playing his violin as Dovidl once did he knew his search has taken a turn for the better. Through a vast journey of people and clues Martin was able to find his answers but was he ready after 35 years to face the music and the reality of the truth that he anticipated hearing for most of his adult life?

This film was a wonderfully directed and written story of love, pain, loss, family, friendship, hate and the remnants of war. It is told through a series of flashbacks in time that play well intertwined among the vast stages of young and old and many years of life for a Polish immigrant with a skill to play a violin like no other. The cinematography is superb and the score is brilliant. At times the excellence of the violin playing took me back to moments in my favorite biographical film, “Schindler’s List”. When he would play the violin I honestly felt transported into a world of peace yet pain and sorrow. Owen and Roth are both exceptional as are their younger selves, Hauer-King, Howell, Doyle and Handley. A phenomenal film that will transport you through time of the past and present hopefully making you aware of the differences in life that time, music, religion and war will forever continue to engrave in one’s soul.

More in this category: « Cats Little Women »
back to top