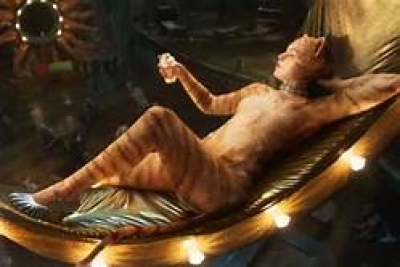 I have always said pets are not throw away items that if you don’t want them any more you can just throw them out somewhere. That’s what happens to Victoria (Francesca Hayward) when she is thrown from a car into the streets. It did not take long for all the other city cats to sniff her out like Cassandra (Mette Towley), Growltiger (Ray Winstone), Mr. Mistoffelees (Laurie Davidson), Rum Tum Tugger (Jason Derulo), Rumpleteazer (Naoimh Morgan), Socrates (Laurent Bourgeois) and Munkustrap (Robbie Fairchild) all members of the Jellicles.

The cats in musical numbers introduce Victoria to some others in the Jellicles, Jennyanydots (Rebel Wilson) the house cat that lounges around scratching herself and playing with her mice, Bustopher Jones (James Corden) the over-weight street cat with a fancy for garbage cans but one cat catches Victoria’s eyes, Grizabella (Jennifer Hudson) the cast off cat from the group that once followed Macavity (Idris Elba) the evil one who seeks to be this year’s cat chosen by Old Deuteronomy (Judi Dench) to ascend into the Heaviside Layer and come back to a new Jellicle life. Playful and friendly to Victoria all the cats enter the theater where they meet Gus the Theatre Cat (Ian McKellen) and experience a catnip high with the assistance of Bombalurina (Taylor Swift) but when Macavity comes around everything takes a bitter turn for the worse yet in the end one cat is the chosen one.

I was very disappointed because I expected so much better than what I saw. Actually the beginning seemed very dry, the middle I felt a bit lost and unexcited but finally in the last twenty minutes of the film I saw some light. It was Swift and her musical number that got my attention the most and Hudson definitely had her moment in the end of the film but all leading up except for the railroad scene kind of dragged. The singing was wonderful and the dance numbers kept my attention especially with Hayward that really brought her game but the writing overall was somber. The direction was good but the cats in clothes and the almost floating in air was a bit odd to say the least. There was some hope with the effects as the cat’s ears movement and the demeanor was entertaining but overall the film lacked to keep your attention at times. Thankfully Rebel and Corden brought some levity that worked well but the film needed more even more of Elba who added some danger to the story. Dench is always excellent in my book but she gave a somewhat stiff yet authoritative personally to her cat character. I am a cat daddy and I appreciated some of the cat movements and behaviors but in the end I felt the film had much more possibilities than to follow the Broadway musical too closely.

More in this category: « Jumanji: The Next Level The Song of Names »
back to top

We have 320 guests and no members online