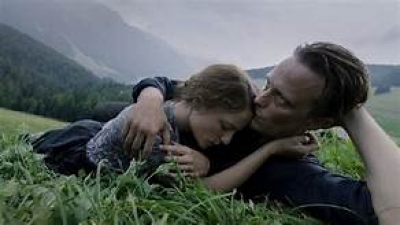 When Franz Jagerstatter (August Diehl) met Franziska (Valerie Pachner) it was love at first sight. Years later living in Austria outside a small village the couple have three children, a large farm with many animals and share field work with the locals. But everything started to change when Franz was sent to ENNS military base in the year 1940 to eventually serve under Hitler’s command. While away Fran’s sister Resie (Maria Simon) along with his mother were there to help Fran with the farm and the children but no one or nothing could replace her husband.

When Franz returned home after his training period the couple feared every time the mail carrier rode by on his bike thinking that the letter would arrive stating the day has come for Franz to serve. They would pray and Franz would spend time at the church which was filled with gold walls and beautiful paintings. Obviously the church was a wealthy institution and feared that spies were among them watching their daily lives and monitoring their beliefs. Franz was a man of church and God and in his heart he knew he could not kill others under the rule of one man, Hitler. But the villagers soon turned on Franz and his family for not serving in war, considering him and his family cowards.

Yet Franz was called back to the ENNS on March 2, 1943 to fight in World War II for the Germans but what he chooses was not to fight but rather be sent to prison tortured as a traitor. Many questions come up from this moment. What will life be like at the farm without him and how will the children grow up without a father. What is his defiance worth? Just because he may not be fighting in the war he is still under command to do chores in prison that benefit the soldiers. In May of 1943, Franz is transferred to Tegel Prison in Berlin where he was still able to write to his wife but back home the villagers became even more hateful to his family. German lawyers tried to get him to sign papers supporting the war and if he did he would be released. But he put his faith in God and asked him for his help and guidance which eventually made him question the Lord’s existence. He was taken to a court of law and addressed with the question if anything he does will change the course of the war? Is there something in man that lives inside us telling us what to do and is it the right answers to so many questions? We question what life is and why are we here but do we ever get an answer? On August 9, 1943 Franz and his family were faced with reality as once again the bells of the church toll.

The film contains some live footage throughout the story making me question what kind of world are we living in? What about the future of mankind? The cinematography in this film is breath-taking of Austria and the score is very accompanying in the films favor. I did not like the way the direction was so stop and go rather than flowing consistently and at three hours the film is much too long. The narration was appreciated but I personally would have rather more lines spoken by the actors. The content will have you questioning life, God, religion, church and so much more but not sure you will get the answer you’re looking for. The story truly captures many meaningful moments and leaves you pondering the behavior of mankind. In the end, both lead actors Diehl and Pachner are excellent with the script they are given and although I appreciate the film making you question the meaning of life I wish it helped in directing my thoughts today in the right direction. We make our choices and must be prepared to live or die from them. Many animals in the film but other than one pig scene none of them seemed to be depicted in a harmful manner.

More in this category: « Waves Richard Jewell »
back to top