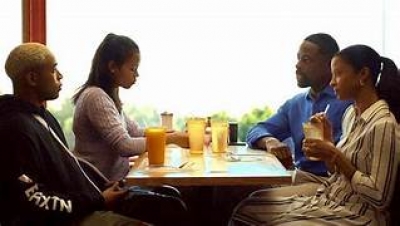 A24 presents an R rated, 135 minutes, Drama, Romance film directed and written by Trey Edward Shults with a theater release date of November 15, 2019.

The story covers an upper-middle class family living in South Florida. Tyler (Kelvin Harrison JR.) is a high school athlete, liked by many, attractive, on the wrestling team with a bright future ahead of him. His sister Emily (Taylor Russell) goes to the same school and holds a special bond with Tyler. Catherine (Renee Elise Goldsberry) is the children’s step-mother who has raised them from a very young age and truly loves them both as her biological own. Ronald (Sterling K. Brown) their father works out with Tyler, watches all of his competitions, spends more time with him than Emily but is stern and abrupt about everything Tyler does.

Tyler is madly in love with Alexis (Alexa Demie) and life seems great for them both but when a road in life runs smooth for too long you know bumps are about to happen. Grant it sex, drugs and alcohol are not always the best combinations for anyone let alone high school sweet hearts. When the bumps begin Tyler loses control and sadly it’s very difficult for him to find the right path especially when his life and heart are involved. We have all dealt with loss, hardship and pain but losing control of one self is never a good outcome. As the story progresses the audience is part of a journey by two families in particular as they try to come to grips of what went wrong and how they all can come to terms with their own lives and that of once again being a family. Even for Emily when she meets Luke (Lucas Hedges) does her individual journey comes to a healing end and that of love and understanding but we all grieve in different ways but hopefully in the end life tries to continue for everyone.

I liked the film but I thought it was way too long which made it come off a bit tiring at times. I thought as the story surrounded Tyler that the writing and direction was well done but it lost its way as it took a turn from its original path. I felt the pain that Tyler was living through and felt sorry for him as he lost his way and even the fishing time between Emily and her father stood out but I guess introducing Emily to Luke the story became slow at times. The acting by all the actors especially Harrison Jr. and Brown was superb but if only the story was shorter and tighter as it is in the first half than the film would have been better. I even liked that they focused on the cat with its health issues adding another avenue into the story but they knew how to keep those moments timely. The music is sufficient as is the score but sometimes I thought a bit off key in reference to the events happening. It was nice to see so many scenes of Florida as well. Overall it a good movie but the acting overruns the writing by far.

More in this category: « Queen & Slim A Hidden Life »
back to top

We have 379 guests and no members online