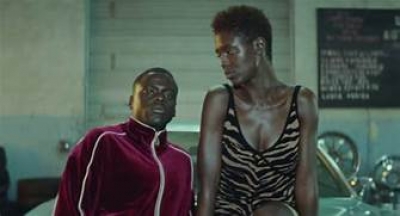 A young couple, Queen (Jodie Turner-Smith) and Slim (Daniel Kaluuya) are sitting in an “all black” restaurant on their first date. While driving home on a cold winter night Slim suddenly swerves causing a white policemen to pull him over thinking he might have been drinking. What happens next is the policeman is killed and the couple is on the run. Do I think the officer was a bit of a jerk? Yes! Even more than a jerk but I won’t use bad language but he was in my opinion wrong in the way he was treating the couple but also Queen was not helping the situation. Pride over prejudice can turn into a deadly matter and in this case it did. But truly the cop was an ass.

Slim had the right idea to report what happened but Queen who happens to be an attorney bullied Slim into a decision he was unsure of agreeing to. Not a good idea to leave the scene of a crime especially a wrongful shooting and the dead person just so happens to be a policeman. On the run the couple encounters many hurdles ones in their favor and ones not so much. In a black bar along their journey of hopes of getting a plane to Cuba the bartender knows who they are, buys them a drink and says your safe here. A joke made later in a scene with a horse, “nothing would scare a white man more than a black man on a horse, why is that, because the white man would have to look up to him”. In a scene when they meet a nice young black boy he looks up to them and considers them a legacy for killing a cop. Later he does the same to a black policeman during a riot.

They found passion along their journey and the love for each other grew strong. When a white couple tried to hide them they stole a car with the help of a black police officer who looked the other way. Even at the end of their six day journey the final scene is still not morally correct. Ok I may have given something away here in this review but after being verbally attacked for no reason after the screening, threatened and made to look like a racist I am angry. My partners in life have and are black, my family is mixed, and I am the least racist person for sure but this woman who jumped all over me would not listen to what I was trying to say but rather jumped all over me referring to me in a crowd of people as a racist. I am personally not black, nor have I been a slave way back when but I have been beaten for being gay and some people may say it’s not the same. Yes maybe so but if we all don’t start to learn from the mistakes of our past and grow together as one person, one community and one life, prejudice will never change. Maybe this woman could have listened to what I was trying to say before she verbally attacked me making me feel embarrassed and uncomfortable for something I am not.

I thought the cinematography was beautiful as is the soundtrack and both Kaluuya and Turner-Smith are excellent in their roles but I have to be honest and say that the writer and director should have thought twice before making a movie that involves so much hate, racism involving both parties and a terrible message that once again sets us back in time rather than trying to move us forward as one people of many colors. To the woman who attacked me and the people that followed me to my car I am not a racist and I love all respectful, honest and trustworthy people of all races and religions. There needs to be an end to all racism towards all races and movies as this one does not help that cause whether black or white.

We have 582 guests and no members online