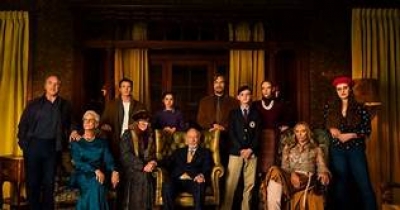 Harlan Thrombey (Christopher Plummer) is the bestselling mystery writer of all times. He lives in a huge home with rooms surrounded by tons of books and statues along with two German Shepherd guard dogs to watch over his property. The evening of his 85th birthday after spending some time alone with Marta Cabrera (Ana de Armas) Harlan is found in his upstairs room dead. Lieutenant Elliot (LaKeith Stanfield) and his associate tend to believe case closed Harlan died of a suicide but Benoit Blanc (Daniel Craig) thinks otherwise.

One by one the Lieutenant and Blanc question the members of the Thrombey family since several of them may have a motive for killing Harlan. Linda Drysdale (Jamie Lee Curtis) the oldest daughter, her husband Richard (Don Johnson) who Harlan knew a secret about and their son Ransom (Chris Evans) a bit of a loser are suspects. As are Joni Thrombey (Toni Collette) the daughter-in-law and her daughter Meg (Katherine Langford) who Harlan was putting through school yet mom was cheating Harlan out of some money. Fran (Edi Patterson) the maid, Walt Thrombey (Michael Shannon) also a writer like his father he has a wife Donna (Riki Lindhome) and a son Jacob (Jaeden Martell) a spoiled brat that apparently has discovered puberty and his penis. Some of the relatives had a fight with their father the night of his birthday and some fell to question their motives towards Harlan’s big heart.

It seems anyone in the house that night could have been the culprit behind Harlan’s death and Blanc is working hard to find out exactly what happened even though some of the clues have been destroyed. In the end we discover just how wealthy Harlan is and who he felt was honorable enough to mention in the reading of his will. Hard to believe Great Nana Thrombey (K Callan), Harlan’s mother was still alive and out lived her 85 year old son.

I absolutely enjoyed this film which is directed and written very smartly. Although I thought this who donnit “Clue” like mystery drama with a touch of comedy has been done before Rian Johnson does an honorable job on keeping you guessing. I thought the actual person to blame for Harlan’s death was a little predictable for most people it will probably keep you guessing. Mostly filmed at the mansion with a few exceptions the house is magnificent filled with walls and walls of fascinating things to look at during the crime solver moments. A great score with some wonderful photography and the use of dogs all play well for this story.

The cast is a list of names most people will know from so many other films they were in over the years. I’d say though the standouts were Craig and de Armas who carry most of the film but Curtis, Johnson, Collette and Shannon all have their superb moments in front of the cameras. Evans, Plummer, Patterson, Langford, Stanfield and Callan all bring wonderful support to this mystery movie of just who actually killed Harlan?

We have 586 guests and no members online