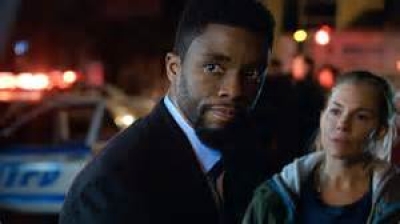 A young boy, Andre David (Christian Isaiah) sits in a church in tears staring at his father’s casket. A well respected police officer killed in the line of duty. Nineteen years later, Andre (Chadwick Boseman) is a police officer like his father was and one that is known and respected by most in his profession. His mother lives with him in his apartment stricken by Alzheimer’s but even though he works double and sometimes triple shifts he makes sure she has a care-giver.

One evening outside of Manhattan a robbery occurs and not only the owner but several police officers were killed in the line of duty in a shootout. Ray (Taylor Kitsch) a trigger happy white guy and his friend Michael (Stephan James) a young black ex-military man were out to rob this wine store that they know was storing cocaine but when they got there before the cops arrive they found much more than expected. Now on the run Davis is on the case but not alone when Captain McKenna (J.K. Simmons) puts Frankie Burns (Sienna Miller) a NARC on the case with him, much to his disliking.

The FBI has given David until 5am to find the cop killers or else they take over the case. With some help from city authorities Davis is doing a great job of tracking down the two cop killers. He has closed Manhattan down, the bridges, the tunnels, any ways of getting out of Manhattan now that he knows they are in the city. Along the search Davis is surprised by some odd misfortunes and unsure if he is looking the devil straight in the eye. In the war on drugs just like death both are downfalls in the city and will always be there. Davis must find the killers and deal with the unexpected along the way all along trying to keep himself alive as well.

I really enjoyed the film even though there are some cliché moments as well as predictable ones. There are also some that are very unpredictable and will keep you guessing. Great backdrops of the city, chase scenes on foot and by car surrounded by a dramatic score and a good cast all lead to a film that should do well in the theater.

Boseman is superb and surely proves to be a leading man in action and adventure films. Miller sad to say was a bit over-acted which could be the director’s fault but she causes the audience to think twice too soon. Simmons is brilliant as are James and Kitsch as well as several of the supporting roles throughout the story. Overall it is Boseman with his sharp looks, quick tongue and the person fighting to do the right thing is the best reason to check out this film. Other than a number of pigs and cattle hanging in a slaughter business there are no animals directly harmed in this movie.

More in this category: « Frozen II Knives Out »
back to top

We have 815 guests and no members online