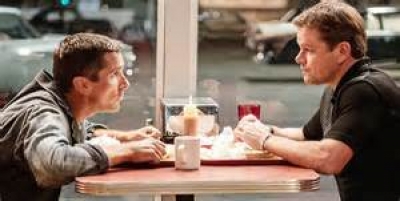 Set in the 1960’s and based on a true story Carroll Shelby (Matt Damon) loves cars and loves to race but after his Cardiologist tells him he has a shot valve Shelby remains on medicine and not driving in fast cars no more. Shelby is best friends with Ken ‘Bullfrog’ Miles (Christian Bale) who is married to Mollie Miles (Caitriona Balfe) with one son Peter (Noah Jupe). Miles owns a garage that is until the IRS showed up but he loves to race and is known to be the best but a bit of a hot head. Actually Miles is a huge pain in the butt especially around Shelby.

Lee Iacocca (Jon Bernthal) happens to be one of the suits at the Ford Corporation who works with Marketing man Leo Beebe (Josh Lucas) both men answer to Henry Ford II (Tracy Letts). The Ford Company is losing money and they must do something to save the company so they decide to up their odds against the likes of Ferrari by making a competitive race car. They wanted to merge Ford with Ferrari but it turns out that Fiat got their attention instead.

Ford knows they need to compete so they launch the new Mustang and also hire Shelby to build a race car within 90 days. Obviously Shelby brings Miles aboard at $200 a day plus expenses but Leo does not believe Miles, a war veteran, doesn’t have a good image for the new Ford racing car. The first car they test fell apart to the Ferrari challenge and since Leo hates Miles he wants him out and a guy with a better image in. Phil Remington has always been Shelby’s right hand man but it is Miles that knows how to build the perfect car. So Shelby makes a deal with Ford and if all goes well Miles will race at Daytona then the La Mans in France for Ford after all. Miles is one man that will test the Ford car to 7000 RPM’s and above, who knows how to build and manage the ideal race car and knows who he is. Suits that work for the boss and have their noses so far up the bosses ass is never the guy you can trust or work for and expect to do what it takes to win unless you break the rules yet sometimes in order to be a team player you have to bite your tongue and deal with the crap.

This film is superbly directed and written. I did not think I’d enjoy the film but it turns out I actually loved it. Lessons learned when dealing with the suits, a good score and some great crash footage and super-fast speed all lead to a high octane and riveting story. Bale always evolves into his roles almost so much you believe he is the actual person the story is about rather than an actor.   Damon too is spot on and extremely believable although sometimes I wished he’d spit out that gum. Balfe is a wonderful support to Bale and Jupe plays the perfect son. Bernthal looks good and is the guy you want to work for but Lucas who also is spot on is that guy at work you just want to take down. Overall a great cast, an exciting story and lessons learned from the past that one hopes not to uncover in the future when dealing with some jackass suits who are out for their own win even though they don’t deserve it. Welcome to the corporate world!

More in this category: « Charlie's Angels A Beautiful Day in the Neighborhood »
back to top

We have 566 guests and no members online